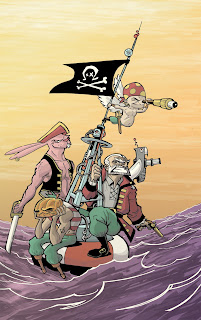 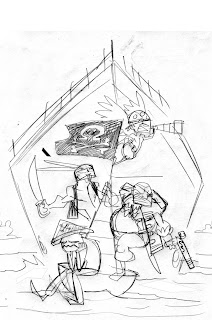 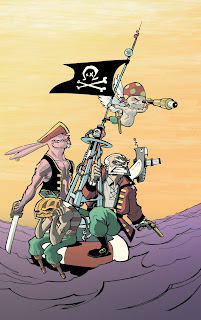 Andrew Foley had the great idea of reprinting Holiday Men for the upcoming Calgary Expo in June. He suggested a pirate motif based on the idea of this reprint being a pirated edition. And so here's the loveable crew of murderous mascots rendered years after finishing the first issue, and adorned in their Sunday Pirate best.

It was interesting to tackle these guys after so long a hiatus. I felt a bit of pressure to a better job than I had a when I first drew them in 2008, I suppose to secretly tell myself that all the time and money on schooling was worth it.

The cover concept changed a bit since the rough thumbnail, mostly just the subtleties of the poses and the removal of the big tanker, which I feel would have crowded the page and taken away the focus from the HMen themselves. I realize the color palette and painting approach is very similar to the piece that will appear in the Calgary Expo Souvenir Book in June (I can't post the pic until the book debuts) so I'm going to have to make some new brushes and palettes, I think.

EDIT: Made corrections based on helpful feedback from Cognoman! And man, Blogger s f-ed right up right now, screwing with my old posts. Blah!
Posted by MR. NICK at 1:57 PM

Your inking is absolutely stellar as always, and kudos on the double-layers of shadows (Bunny's arm, Pumpkinhead's arm). Looks like you used gray (or a low-opacity black) for most of the shadows, which is kinda dulling the vibrancy of the image, especially since your colour choices are fairly pastel-y/grayed out to begin with. If you wanted to try adding some vibrancy to the image, you could use different colours for the different shadows (i.e., the shading on Cupid's body could be a brown/peach or a dark pink... or maybe go crazy and have the purple colouring of the water reflecting back up and giving everybody purple shadows). Some white froth in the water might add visual interest to the water too. Looks like you missed a spot of shading on the underside of the Bunny's bicep... unless that's some sort of reflected light dealie or something like that - in which case, kudos for thinking of such a thing. Also, another thing you could think of is that the objects in the picture would be casting shadows on to each other too (i.e., that buoy tower could cast shadows on to Santa if you wanted it to, etc.).
...getting carried away here, gotta stop. But yeah, you're pumping art out like a firehose, sir. Exciting times in Nick Soup Land indeed-

Thanks for the feedback, Cogs. I'm going to get in there and make some changes. It just wasn't feeling right and your feedback will definitely help it along. Thanks, man.

Oh, whoa. Art is subjective, different people like different kinds of things, and so both the old version and the new version each have nice qualities of their own, but I gotta say: I like this new version better, heh heh. The dark shadows in the old version are dramatic in a Sin City/chiaroscuro way (which can be nice), but even just looking at the thumbnails, this new version just feels more cohesive, finished and dynamic to me (that water almost looks like it's moving). The way you did the water really changes the feel of the entire drawing too; the new water looks turbulent and energetic, making the old water look flatter/deader in comparison (which again, can be a nice look too if that's the look you wanted). Rendering water is an interesting challenge and it's cool to see how you did it. For some reason, it reminded me of some pages Fiona drew of a Viking ship in a stormy sea. Here: http://fstaples.blogspot.com/2010/06/northlanders-29.html
So yeah, I guess that's another approach to water, if you're interested.