Alright!!! So I'm finally finished penciling and lettering SPACE NINJA MONKEY FACE! It took way too long, but it feels nice to have another story freshly squeezed from my mind grapes and ready for mass consumption.

Just gotta wait on Conor's inks now. They will blow. Your. Mind.

ROCKET JUICE will debut at the April show in Calgary and it's going to be sweet!

Immediately after finishing a project, the question becomes "What's next?" I'll be working with another Edmontonian writer, Robert Burke Richardson, on a short story which we're hoping to see published, though I won't yet say where (don't wanna jinx anything:)

Also, VA has had some sweet publicity lately! And you thought we'd given up!?! You can see a glowing review in this month's BROKEN PENCIL for the classic Gord Cummings release MERCY SEAT Volume 1. I got to draw Gord's willy in this one and the reviewer had this to say:
"This zine includes, I kid you not, the cutest cartoon penis I have ever seen. Seriously I never knew that the penis could aspire to the adorable, but apparently Cummings' unit when he was in grade school could have been captioned as a lolcat."

That should probably go on the cover of future reprints:)

Next, we had the pleasure of being interviewed by a very nice fellow from the Calgary Journal, Kevin de Vlaming. It also features some wise words from local artist Riley Rossmo and a pic of three of the handsomest devils that VA has to offer;)

What's that you say? "Enough chit chat, Nick. Make with the pictures!" Sorry, you're right. 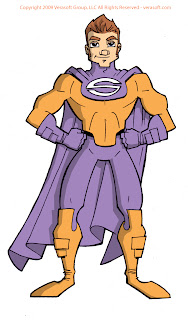 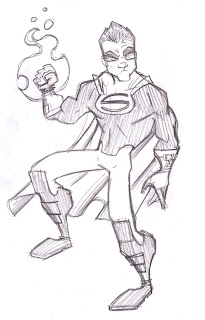 Here's some more Verasoft stuff. The first is the final product (the client requested the color scheme) and the second was my first stab at the pose, which I like better. Who doesn't like a badass? I guess no one wants to buy software from a pissed off superhero. 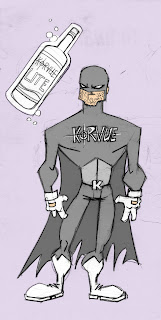 This last one was done a long time ago for a strip for these guys that never quite got made. I love this design, but once again, no dice. Dems da breaks. Just means I can use it later:)

You could say the second pose has a LEG UP on the first!

i could google it..

but it's more fun to ask.

Curse you and your infernal wit, Eff! Now my artistic inadequacies are splayed open for all to see!