I really should be in bed right now but I'm up late doing (what I hope to be) the final colors for my latest piece for Verasoft. I just can't get to bed right after I finish working because my brain is all wired.

This was a toughie, as I had some difficulty giving life to the client's fairly specific vision but I think it turned out alright in the end. I guess I'll know for sure when he emails me back later. It was also one of the first times I have had my work critiqued based on a vague description I gave to the Drink n Draw folks:) It was surprisingly informative.

The right is pretty blank because that's where all the words will go. 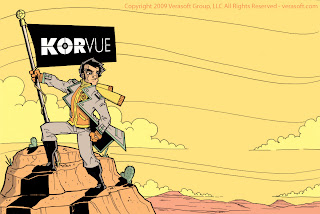 Tonight was also the first table reading for The Wizards' Christmas, the upcoming animated film from Calgary based New Machine studios in which I have landed a juicy part. It was so much fun and I am getting really excited about this. It's so great to be a part of such a large production where everyone is adding there own creative expertise (no, that doesn't refer to my squeaky voice work) to achieve this wonderful final product. Plus, apparently I'm a ham, so this acting thing is way cool to me:) I'll keep you posted on the release of this future classic.

The lighting is iffy, but overall the Korvue thing looks cool! I really love the colours, the bit of purple in his clothes works really well. Good outfit too.

Since you've got that super strong black shadow, I think there should be a big sun behind him

Yeah, the lighting is all over the place. One of the many things I have to get schooled on.

We talked about putting a sun in the background after this was sent off, but they wanted it to be the Korvue target logo and I just couldn't get what they wanted before the deadline:(