Just got back from watching the Watchmen.

Goddamn, what an experience. It's a special thing to be able to to see something so bizarre and unconventional playing out on the big screen. It's really heavy, very moving stuff, as is the comic book itself of course, and they both really inspire me to add as much weight and care as possible to all of my upcoming written projects.

Speaking of which, I've just finished a fairly detailed breakdown of the Reactionary plot. It was brain straining work, as I'm trying to get the story as tight as possible, but I think it'll be worth it. I am a little worried that the content might be a little harsh though. Guess we'll see. Next step is to hand it off to my pal, Drew, for some great critique.

Here's a pin-up I did this weekend for an anthology book being published in Edmonton: 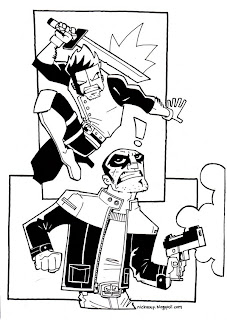 The book is being put together by Paul Lavalee and this is his original character, Sabotage. I was going to add some gray tones but . . . I just didn't feel like it, I guess. I think the piece is still pretty strong in the classic black and white though.
Posted by MR. NICK at 8:22 PM

Yeah, it doesn't need greys. "Classic" is a good euphemism for "lazy" though! Gonna use that. "Rendered in classic pencilcrayon." "Classic uncooked hot dog dinner."

Now I'm off to classically watch TV instead of drawing, in my classic filthy apartment.

Looks good Nick, but Fiona has a point... some pencil crayon rendering could really help.