Okay, so I'm seeing a trend here. I tend to drift in and out of these various obsessions. Creator wise I mean. Not, like, stalker shit or anything.

Like right now, I'm crazy for Daredevil. I've got DD Fever. Just got the first Bendis Omnibus and it's kicking my ass. I'm starting to think that one day, I may just want to do a DD story. And god, do I ever want to see them take another shot at the movie. I just watched the Affleck one again last week.

My god, does it blow. Jesus, it blows.

I think it blows worse after watching Dark Knight, which is essentially is the greatest Daredevil story never filmed if you ask me. Which no one has...yet. But there is a one hour documentary on the DVD that interviews the likes of John Romita (Jr. and Sr.), Gene Colan, Frank Miller and Bendis, and it is one of the most inspirational things I've ever seen. It's chock full of passion and insight, from both the writers and artists, and always give me chills. I mean, Frank Miller talks about Daredevil like he's a real person. He calls him "Matt", like he's a friend that he's known for years.

What's so alluring about the character? Matt Murdock is this guys always trying to do good, but has a tendancy to fuck up. And when that happens, he loses control. He gets pissed off. And he makes more mistakes. But regardless of how low things end up, he keeps fighting his way through the muck and the mire. He gets the shit kicked out of him and he gets his heart broken and he breaks a few of his own.

Everyone talks about how Daredevil is Miller's character, but I really think Bendis is the man to take that mantle. He really made DD his own. He shook things up. Made changes. Took risks. And kicked a few asses himself:)

Jeez, I've had a few beers here to be honest. And sometimes, after a few, all I want to do is talk comics. We just recorded our first VA Podcast last Tuesday (hopefully we'll release it soon) and I found myself totally caught up in this conversation with Gord about Brian Wood's LOCAL. Great book. And fun to talk about. I think I sometimes take for granted being able to talk comics with all of the talented folk in this town. I'm lucky to have this.

Anyways, I drew a bunch of DD pics the other day and here's one all colored up. 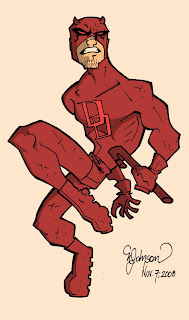 I love the way you did his face. It's stellar man!

yeah Daredevil so daring, the Bendis, Maleev stuff is fantastic and so is some of the Frank Miller, before he went insane. Nice pic