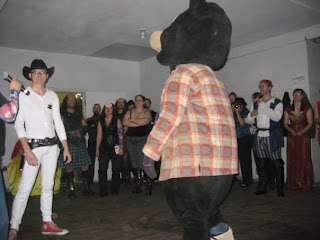 So Fiona, Steve and I went down to Edmonton for Pure Spec and it was a blast. I knew the costume ball would be worth the trip up and I was right. Here is proof. Me preparing to partake in a dance off with a human sized cow. I won. Aw yeah. I also did this drawing of Steve as a zombie, because he's always drawing people as zombie's so I figured he'd like to know how it felt. Suck on this you bastard! 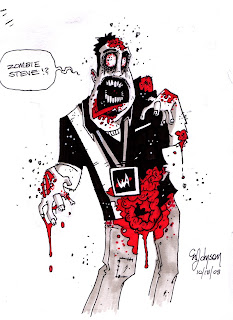 Okay, so the following week, last weekend, was 24hr comic day in Calgary. I understand the international event was held two weeks ago, but who gives a crap right? Here's is a picture of myself, filled with despair and self loathing, the usual mentality of a 24hr marathon artist at around 3AM. 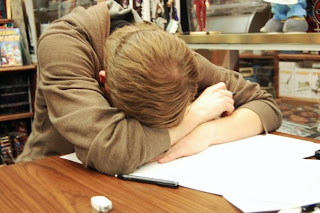 But believe it or not, I actually finished (thanks in no small part to Fiona for helping me ink and Conor, Dan, Gerald and that weird kid Neil for filling the day with laughs and entertainment.) My story was called ME AND I and it featured two best buddy doppelgangers. It's some of the cutest, most adorable work I've ever produced, but it ends in utter tragedy. I didn't even consider another ending but I'm not sure why. It was a low blow to see if I could make the reader feel something after lowering their guard with cuteness, I think. Cheap shot, I know.

The style I used was very simple just to keep things quick. 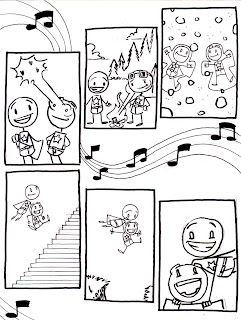 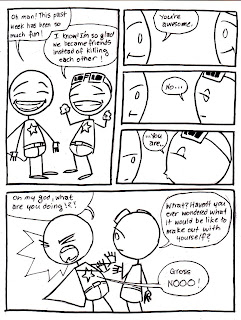 Well, that's all for now. Hopefully I'll have Space Monkey done very soon so I can move on. Ugh.
Posted by MR. NICK at 9:42 PM