Pride and Prejudice and a little Punk Rock

I'm way behind on the blogging but school is very nearly wrapped. I've been busy with all sorts of cool stuff (from school to... comics! [GASP!]) and I'll be updating lots in the next few weeks for sure.

So let's kick things off classy:

The Environments class was way tough but I learned so goddam much. This project was especially tough:  describe a classic character using artifacts and environment and then reimagine that character in an entirely new setting and genre. I wanted a challenge so I picked something super far removed from my normal taste. But Pride and Prejudice is one of my girlfriend's favourite books. And I had to discover the secrets of wet Colin Firth and his abilities to drive the ladies into a frenzy. 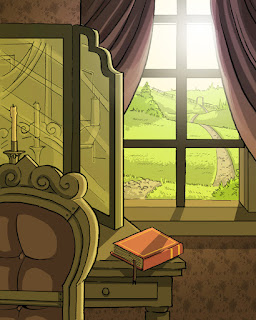 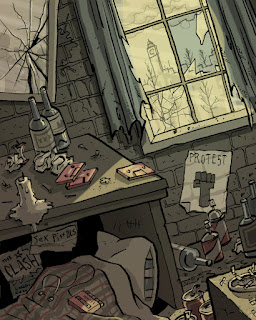 This first pic is from the view of Elizabeth Bennet's bedroom. The reinterpretation takes us to a London squat in late 1970s London for a tale of young love in the midst of the rising punk scene. 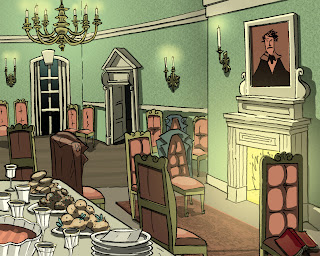 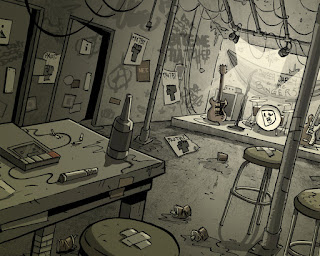 God, I just hate the way that first ballroom picture turned out. Looks like it's something out of Edgar Allan Poe, but that's what I get for throwing in a creepy fireplace portrait of some random moustached creep. The dive on the bottom is where Liz first sees Mr. Darcy in his band, Dapper Darcy and the Bingers. She hates him at first. She thinks he's a total poser. 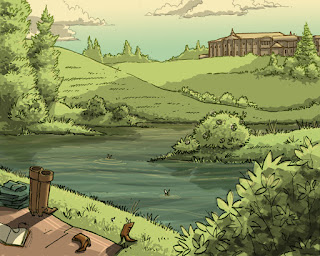 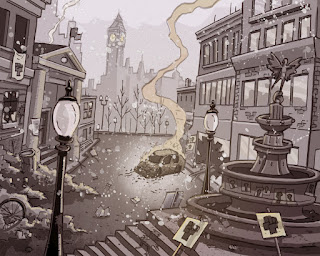 And finally, Mr. Darcy and Elizabeth picnic outside his estate and she spontaneously decides to go for a dip, Mr. Darcy in tow. The lower pic features the spot where Liz and Darcy share their first passionate, post-riot kiss in the warm glow of a burned out car... (*wipes away a tear...)

I'd say the reinterpretations turned out way better than the classical pics but it was nice to try something different, stretch some new muscles.

And maybe Pride and Prejudice isn't the most boring story ever created after all.
Posted by MR. NICK at 1:33 PM

Sure, the miniseries has Colin Firth's wet shirt, but I actually like the 2005 (or so) movie with Keira Knightley. But neither are as good as Emma with Gwyneth Paltrow. Or Clueless. Also, I haven't read any of the books.

Well, I was feeling a bit guilty about not actually reading the books but that has been assuaged. Thank you.

But I don't think I'll be watching Emma.

Clueless is funny. Paul Rudd is so charming.