Today was the last day of school, wrapping up my 3rd year at ACAD and ushering in the final year of impending doom/glory.

So here's the last project submitted for the year: 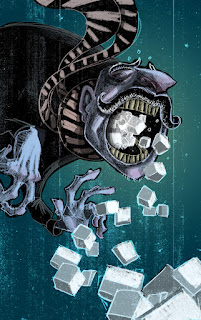 A bit of a breakthrough as far as media exploration, this piece illustrates a scene from Shane Jones' Light Boxes, a beautiful, melancholic fairy tale for grown ups. It's a beautiful little experiment of a novel filled with beautiful, grisly imagery and it really messes with the craft and theory of storytelling. This scene is fairly self explanatory. Thaddeus has been standing in the middle of his frozen little village as a from of protest, hoping to retrieve his kidnapped daughter from February, and he suddenly vomits ice cubes.

The process: I drew the image in pencil, enlarged then inverted it on a photocopier (where the hell did that idea come from???) and then drew in the highlights with a white china marker (I figured this would really get across the merciless cold), scanned and coloured digitally. 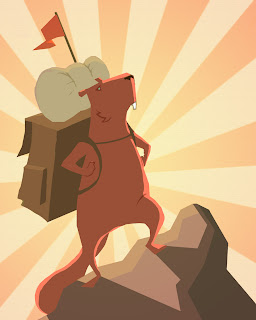 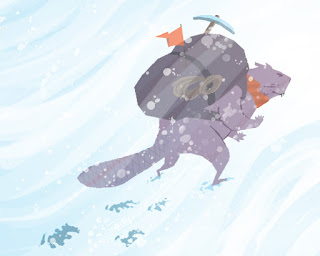 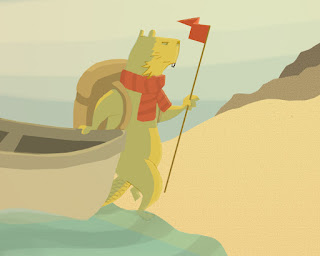 So here is one of the lengthier projects of the year, and the toughest. Select a company and create spot illustrations for their annual report that describe a metaphor for an aspect of the company. My chosen client was ROOTS. The metaphor was "new strategy for a new market." And somehow, after many sketches and discussions with my instructor, I ended up with beavers.

A cute beaver mascot bursting onto the scene, exploring new lands and being generally EXTREME in every sense of the word. My whole reason for selecting Roots was to work on my fashion illustration so, needless to say, I got a little sidetracked. I really dig the first two, the canoe one just wasn't working at all ever, so screw it. 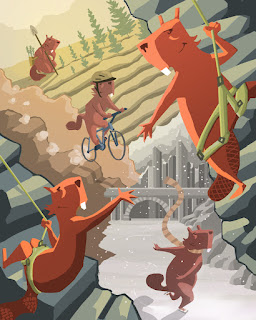 Here is the final montage piece we had to do that incorporated the same look and concept but with different aspects of the company (environment, active, Canadian heritage, community support.) All of these pieces were my attempt at escaping the crutch of the line and relying on shape, colour and pattern to create a composition, very much inspired by Charley Harper. Some small victories here.