Okay, so I've definitely fallen behind on my "post-a-day" attempt, though I did do a bit better than last year. But stuff happens.

Webster's Dictionary defines Stuff as :
-heinous computer problems and internet troubles
-writing a short prose story for submission to a local anthology (that feels nice)
-all around laziness

But here's a bunch of character designs for the upcoming No More Parents (which I get more excited about with each passing day:) 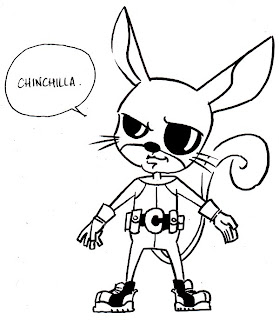 Chinchilla! I did this with a brush pen, which is why it looks so sloppy. Maybe I'll stick to the regular pens when I ink the book... 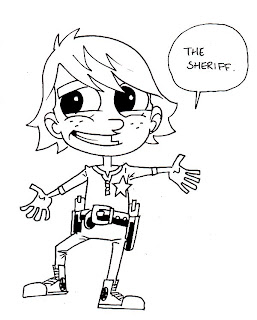 The Sheriff is based on me and a costume I wore to Pure Spec last October. 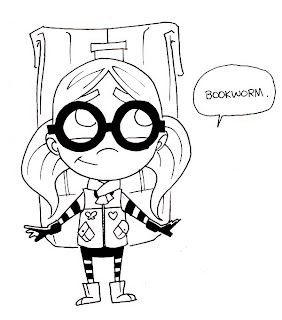 This is Bookworm and I just realized I forgot to draw the straps of her huge back pack full of books. I think she'll need a bit more tweaking anyway. Looks a little too conventional. 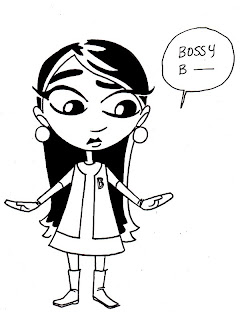 Bossy B--(etty or Bertha or whatever we decide to name her) is my fave design I think. The dress is modeled after one that this lady used to wear at the insurance place I worked. It was so mod and so Kirby at the same time. It was a bizarre thing to wear at the office but I thought it was pretty sweet and I knew I would use it eventually.

The Manga I was working on for Zeros2Heros has been posted and you can read the entire volume of stories online right HERE.

My story is called A Day to Remember. I think it's quite obvious that this was my first attempt at Manga, as my work doesn't really fit in with the others (which are all very solid) and just ended up looking a bit too kidsy I think. Ah well. Learning! It was great working with Nick, the writer, and Morgan, the editor. I hope to do so again soon.

Been reading a lot of books lately. Like actual written books. Which is partly why I was so hell bent on getting my short story submitted to the local anthology. I've been bit by that writing bug and it's consuming most of my daily thought. Here's what I've read in the last two months that has my mind a-buzzing:

All very awesome. Next on the chopping block:

The Alchemist by Coulho
V. by Pynchon (with more to follow from this guy, I'm sure.)
Posted by MR. NICK at 8:15 PM

What happened to "I'm going to ink the whole thing with a brush pen!" ...?

If you're looking for books that might expand your mind check out "kafka on the shore" and "hard-boiled wonderland and the end of the world" by haruki murakami.

Nice blog, thanks for posting.