Alright, I'm a day late posting but it was Friday! 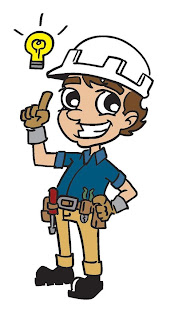 Day Five: Lenny the Lineman is a cartoon character I created for Fortis Alberta (where I currently hang my hat as a Xerox contractor nowadays) and will probably be making his debut at the Birds of Prey Centre...wherever that is. Lethbridge maybe?

This is a unique piece in that, after I inked it, it was vectored and colored by my friend Sean Rice, making it suitable for embiggening on posters and it's my first official work that's been vectorized. So this is definitely a collaboration.

After the drawings had been inked and colored, the powers that be were originally concerned that his sleeves being rolled up would be a potential safety hazard for this cartoon character. Regulation states that lineman can't roll up there sleeves.

In protest, Sean declared that if we had to change this drawing to pander to this request, we would pull it and replace it with a purple dragon. Lenny was then approved.

I put in my three weeks notice at Xerox to prepare for a stay at the Creative Kids Museum (at the Telus Science Centre.) Here I will be the resident artist for a limited stay, manning a small exhibit called COMIC WORLD! More details to follow, but basically, it'll be a little place where I will display the history, process and magic of comics, along with my comic work.

Even more exciting, is I will be working on the spot to complete a brand new all ages story called NO MORE PARENTS! Based on an idea I had last year, this exciting romp will be written by Andrew Freakin' Foley and drawn before your very eyes, at the centre, by myself.

Can't wait to get started. The exhibit opens in July, and I'll be posting pieces throughout the month as the date draws closer.