Alex: I guess I'll start with the question that's been on everyone's mind here: Where the hell have you been?

A: Any particular reason?

N: No, there's a few. I mostly just hit a rut lately, despite the fact that a lot of really exciting things have been happening. But like I said before--

A: This isn't a whiny blog about your life.

N: Exactly. I want to focus on the cool shit. The art. The stories. The process. There's a lot in the works right now, I just haven't been doing much lately.

A: Alright, well I know you have a tendency to be rather vague, so I'll bite. What are these "exciting things" you're working on?

N: I just finished my first paying gig as a freelance illustrator working for an ad agency called Verasoft. My contact there is a great guy with some cool ideas and so far, the experience has been really positive. Here's the first finished piece. 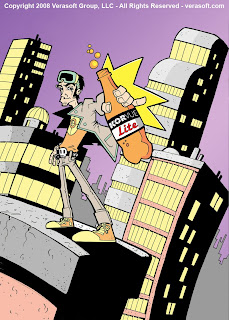 Not sure when or where it'll hit, or how much they'll mess around with it. But I was pleased. With everything but the label anyway. Just couldn't get it quite right.

N: I tried pretty hard to get the right palette here. I don't work with color often and as you can see, not a lot of values or texture is used. I do all my coloring with a mouse at the moment (which is, needless to say, a huge pain the ass) but I plan on purchasing myself a sweet ass Cintiq soon. Learning up on color will be my first priority.

A: Good to hear. Are you still working on the next VA Anthology ROCKET JUICE? Wasn't that supposed to debut this month?

N: Yeah, I missed the deadline on that one. I'm not sure why it was so hard for me (or the other VA guys) to pull this one together but we just couldn't. I suppose we're all really busy doing our own thing at the moment (paid gigs, lifting the kettle bell, growing a beard) but it'll definitely be ready for the big Calgary show in April. In fact, it'll be a better book with that extra time. As it stands, I'm really pleased with my story so far. And everyone else's looks great.

Fiona Staples is in the book. She's actually the only one that finished on time:) And it looks awesome (despite what she says.) Very funny. Her first written work, too. Makes the rest of us look bad. Maybe we should cut her outta the book...

A: Assuming you don't want to make any money, that would be a wise choice:) What's this I've been hearing about a secret project? Are you trying to build a buzz by pretending people care what you're working on?

A: (laughing) I'm just being a prick.

N: (Laughs) You writers just can't help what you are on the inside.

A: But seriously, what is it?

N: I don't really want to give away to many details, as it is still more of an idea than anything, and I hate talking about ideas too early on. But the final draft of the script is finished and I'm getting some very positive feedback.

N: No. I'll keep you posted. I'll keep the cat in the bag for as long as I'm able. But I'm pretty excited to dig into it, so that probably won't be long.

I'm still doing illustrations for Beatroute magazine as well. I've got a few more gigs out of it with the possibility of another big paying gig from a contact who's moving up. It's nice to see that thing happen, as I'm always telling people "make contacts and connections and they'll be your doorway to more work and blah, blah, blah," and it's actually true! That actually works and is happening to me right now.

Jesus, this interview is long. You're going to edit it for space, right?

A: I've already satarted to. I cut out all that stuff you said about maybe going to art school. It was just kinda boring.

A: Are you still working with Andrew Foley.

N: Oh yeah. That's too much fun to ever stop. I am chomping at the bit to finish SNMF just so I can get back to drawing Episode 2. I have slight redesigns for all the characters and my pencils have gotten a lot tighter since the first part. I can't wait to see how it turns out.

Plus he sent me the first 5 pages of another script that we may pitch to Zuda. It's hilarious and riduclous. Ridicularious, I'd say.

And he's also helping me develop an idea I had a ways back to possibly pitch as an animated show. That's very exciting as well as it is an all ages concept, which I don't do very often. I like kids n' all, I just like nudity, swearing and violence more:)

A: On that note, I'd like to thank you for your time.

N: No problem. Thank you. This interview forced me to update and think a bit about what's on my plate.

A: Good. Maybe you'll get off your lazy artist ass and have more to show us.

N: Sooner rather than later.