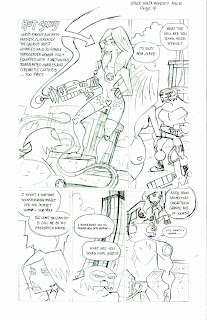 Fall is coming. I see it coming. I feel it in the air. Is it part of the reason that I can't keep my ass at the drawing table for more than an hour lately? I suppose there are a few reasons. But although my SPACE NINJA MONKEY FACE pages are coming out at an ungodly slow rate (terrifying considering ROCKET JUICE is to be released in the next three weeks) I am quite proud of the results.

HOT SUZY is a character that's been shacked up in my head for awhile. I never thought I would draw her. I was quite intimidated by the thought of drawing this lady/man because of my lack of experience with the female form, especially since she is a character that flaunts her sexuality. But one of my main pieces of critique when I went to Seattle was to work on my ladies. And work I did. Still have a long way to go, but at least les Femmes de Nick don't look like men with tits anymore:)

I saw a movie called THE FALL last week. It's directed by Tarsem, who directed that weirdo JLo movie the CELL. It comes with my highest recommendation. It's a beautiful, visually stunning movie filled with laughs and heart and tears and sea elephants. Please watch it.

So I have been working on this other secret project of mine (not so secret if you talk to me in person for more than three and half minutes) and it's got me giddy with excitement. It is probably a good reason for why my comic work is going so slowly. But it's going to give me an opportunity to work with many of the talented people I've become friends with over the past few years and it'll give me a chance to scratch a very persistent itch.

This is a long post, huh? It's the first time I've ever updated my blog on a Sunday morning. I'm really fighting all my primal urges to start spewing retrospective, life shit. But this is an art blog and shall always remain an art blog.

I just remembered I have a lady drawing from Drink n Draw this week (which was an absolute blast, by the way, thanks partly to meeting Fiona Staples' cool friend Karen, from the UK. I think she said she's from Gladsham. My roommate Chad and I hounded her about accents for far too long:) Anyways, behold the splendid glory of the more experienced female form:

Oh, never mind. My scanner is being a douchebag:(

Grantham! Gladsham is not a real place. In fact, if you google "Gladsham," your blog is the first thing that comes up.

Perhaps somebody should update their blog!

I know, I always say that right after I update mine, because that gives me the gloat-clearance