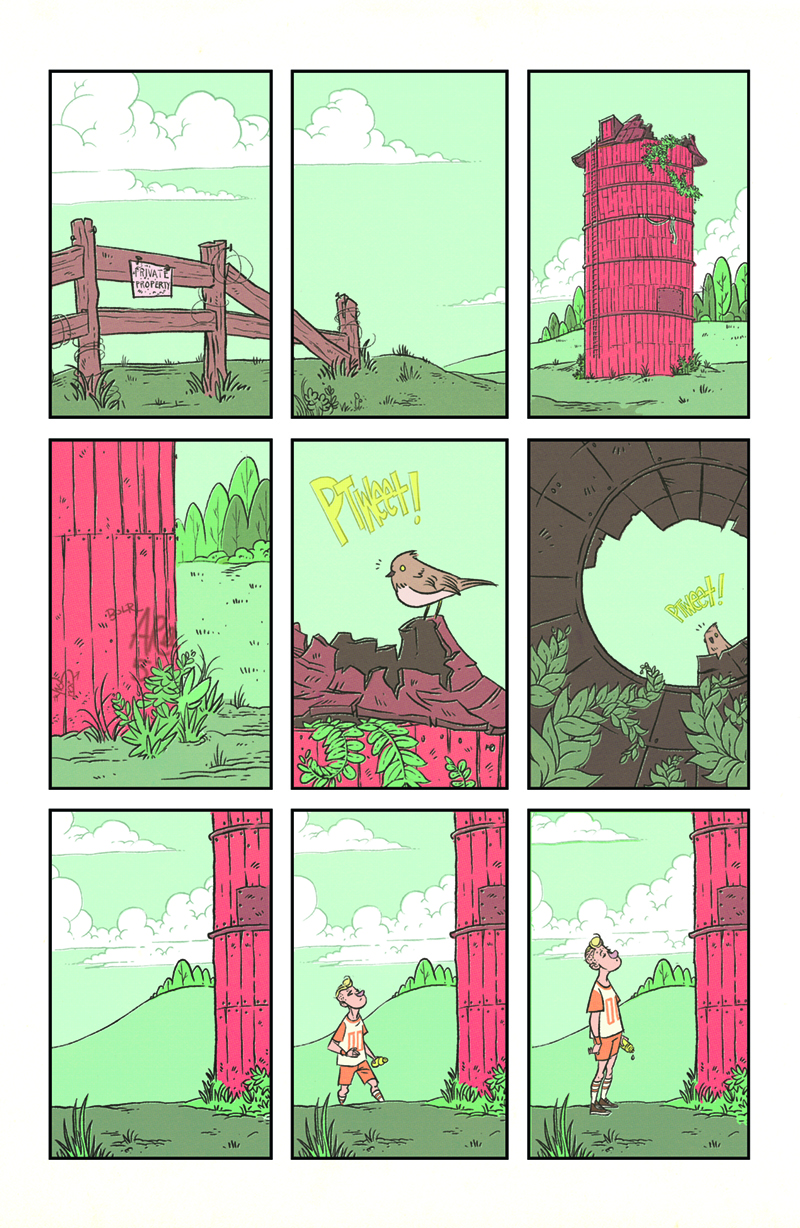 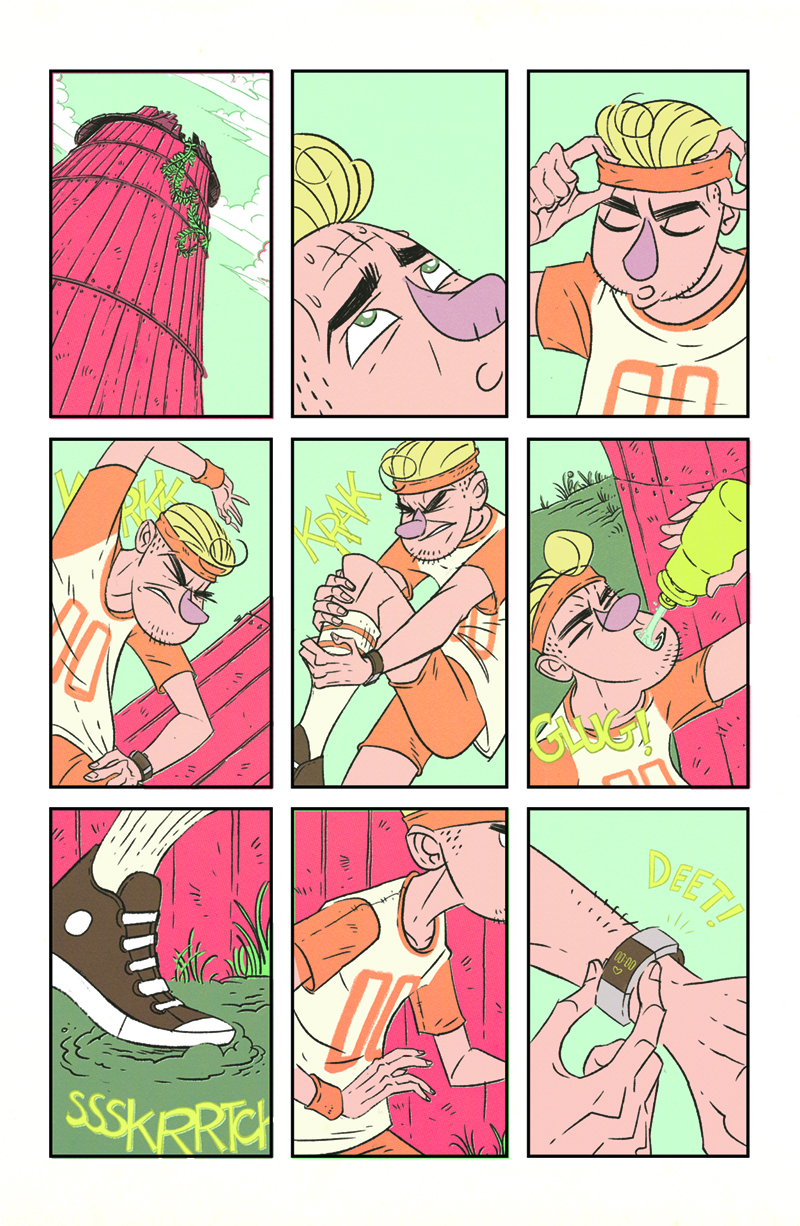 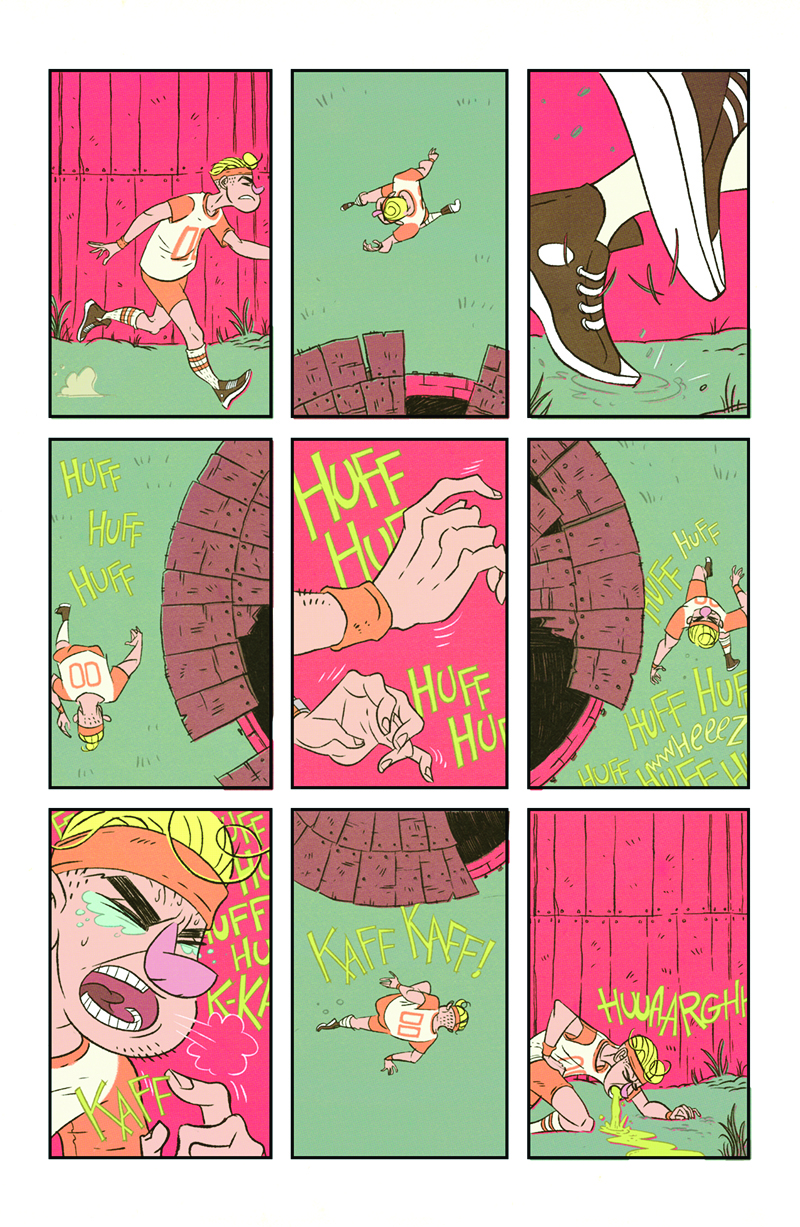 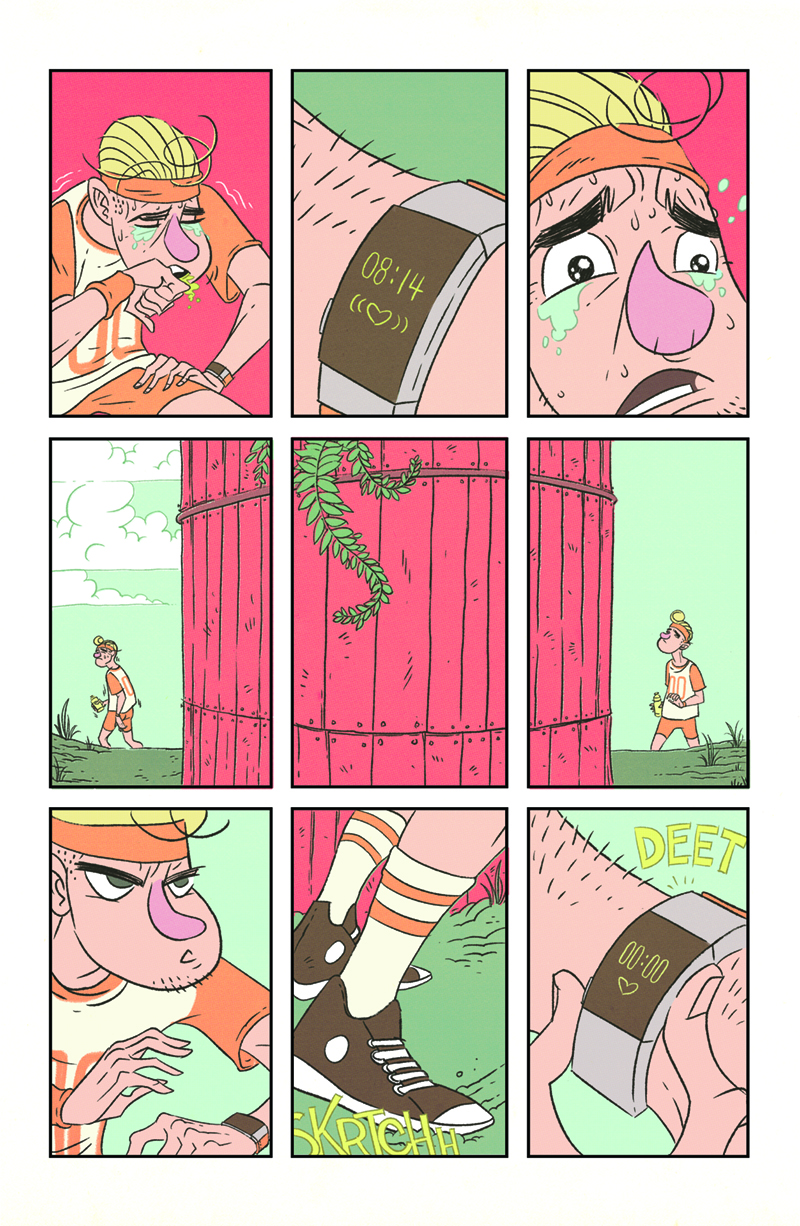 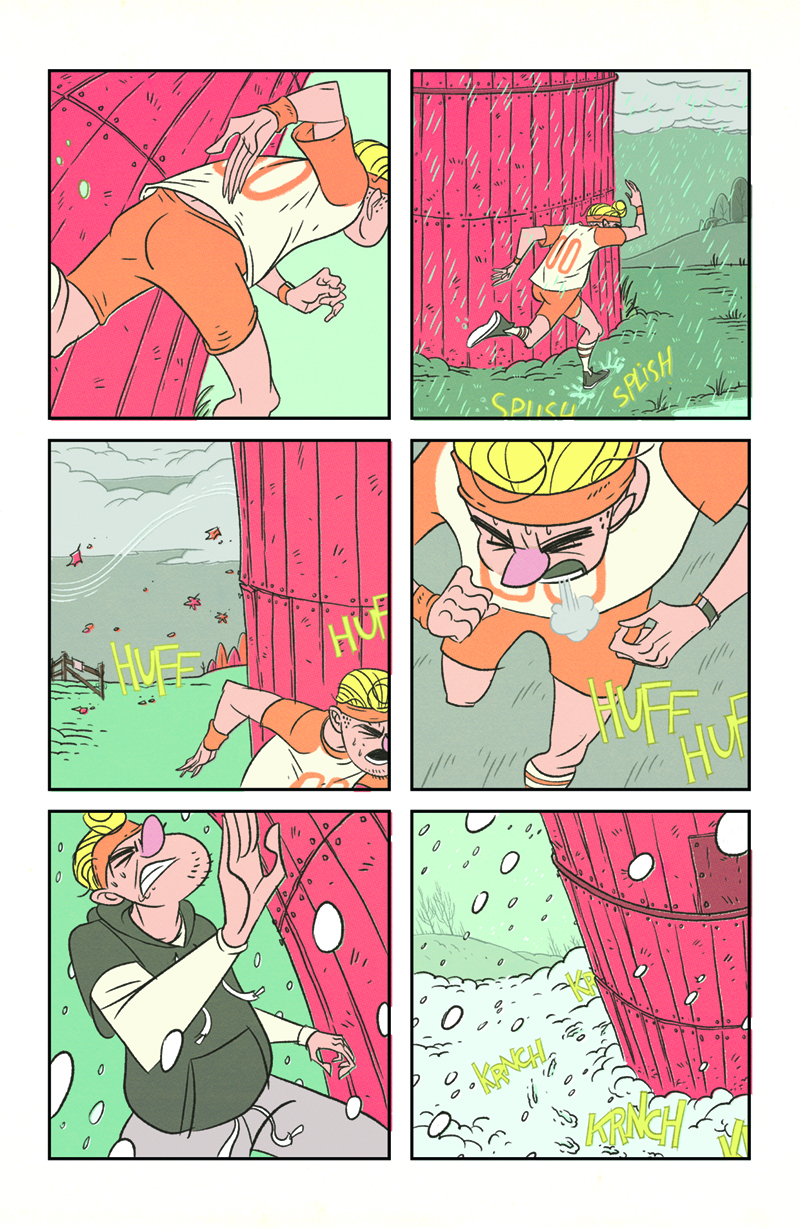 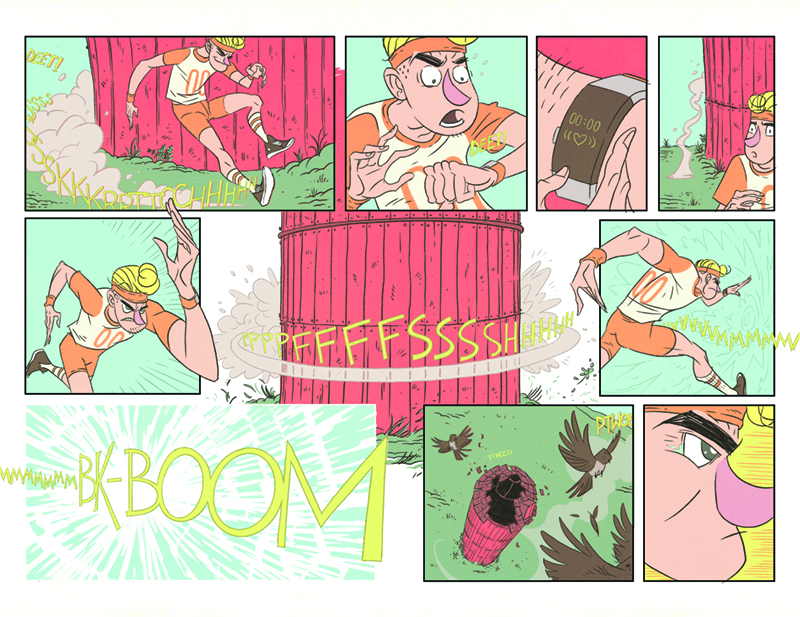 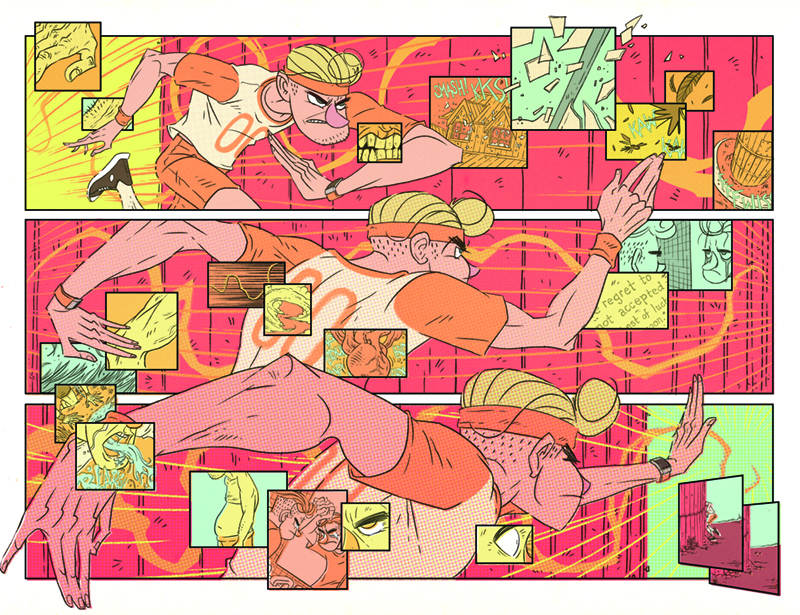 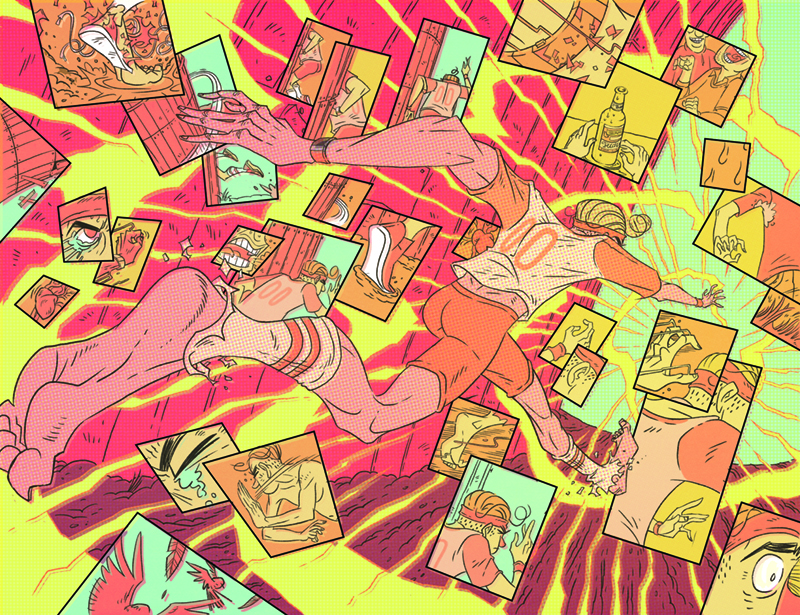 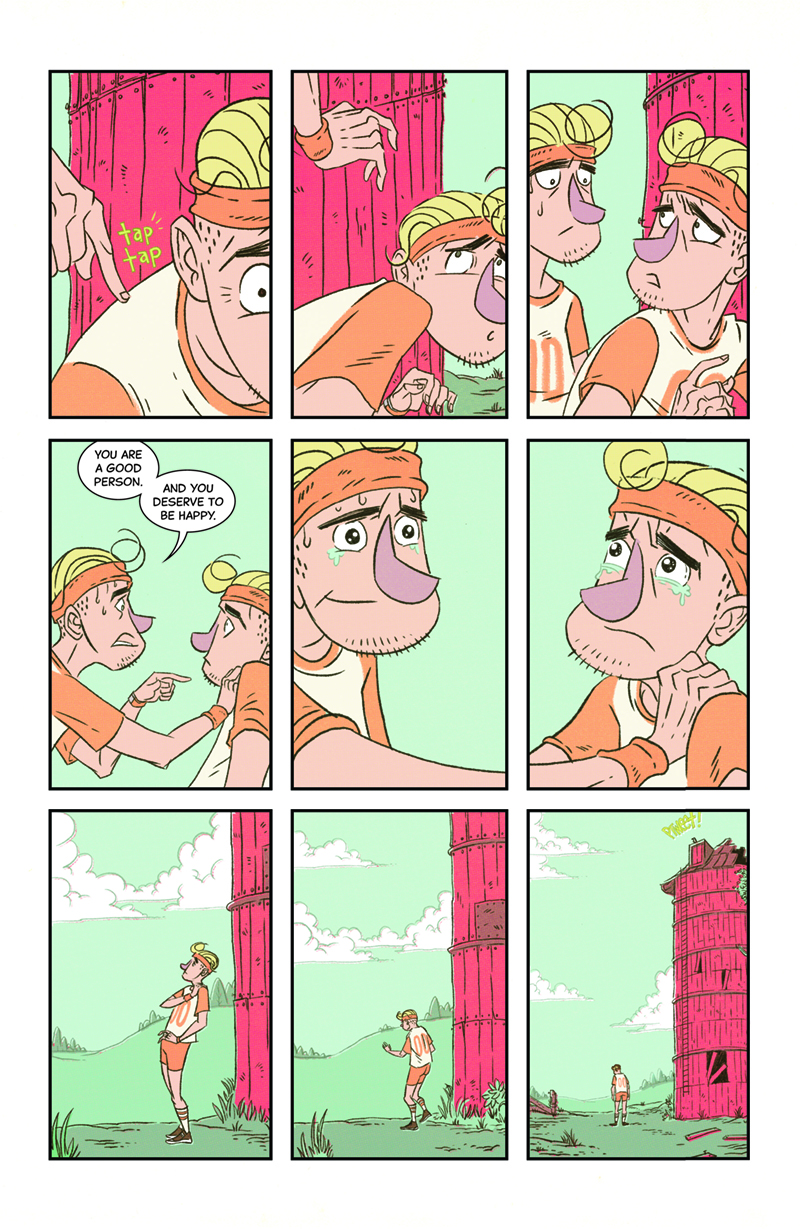 And with that, The Silo Run is wrapped! The colouring stage was a lot of fun, and I am quite pleased with the final result. Showing restraint in the final colour palette is always a challenge; there is always the temptation to use as many colours as possible! But I forced myself to stick to a simple complimentary palette, the major colours being red and green, with some yellow and orange hues thrown in there to balance between them. To ground the setting in a more realistic world, I kept the colours relatively desaturated. As things get more conceptual, as reality and physics begin to bend and break, I juiced up the saturation. I also exaggerated the ben-day dots and pushed the colours slightly-off register; a meta approach that reinforced the idea of the runner pushing the boundaries of time and space, breaking the borders of the comic itself.

Once again, the most challenging page was the spread on 10 and 11, with all the inset panels swirling around the runner. I had so many colours bouncing around that it was impossible to ficus on anything. So I kept revising it and simplifying the colour, especially in the inset panels, all in an attempt to keep it clear and readable.

But it's not just the colour palette that contributes to the final look. Because digital colouring can be too pristine, and lacking the warmth of analog media, I've been playing experimenting with half-tones and scanned textures. Combined with a slight "misalignment " of the BG colours, the effect resembles old-school comics and risograph printing. Hopefully this gives the story the texture and warmth I was looking for.

Though I had decided that I would use minimal text in this comic, I find myself rethinking it. My main worry was whether or not the storytelling was clear enough to build up to that final moment. I ran it by Natasha for a second look and we both agreed that it works as is. Heck, I may reassess that after a few more people look it over, but I that last line certainly carriers a lot of weight as the only spoken words in the story. I hope that it helps this positive message to resonate with readers.

I honestly can't remember where this idea came from, but it showed up in my brain pretty fully formed. It is one of my most personal stories and it felt really great to have the opportunity to bring it from abstract idea to fully formed story.