That is my heavily researched (Wikipedia) metaphor for what the month of March has been like thus far, with a bunch of projects popping up, in addition to moving to a new place and getting Wolf Hands out on a regular schedule. Yep, it's been busy, and when you're in a tiny-ass boat getting tossed around by giant-ass waves, things get a little scary.

Why am I trying so damn hard to get you to visualize pictures in your mind box? This is an art blog. It's time to show off the fruits of my labor using actual pictures.

Big news: For the first time ever, I am a Creator Guest for the Calgary Comic and Entertainment Expo. As such, I wanted to be sure that I submitted something for the Souvenir Art Book this year. Since they don't want us revealing the image till it is printed, I have provided a snippet.

To tease and to tantalize.

It may or may not get picked for the book, but hey, there's a dinosaur on it, how could they say NO? 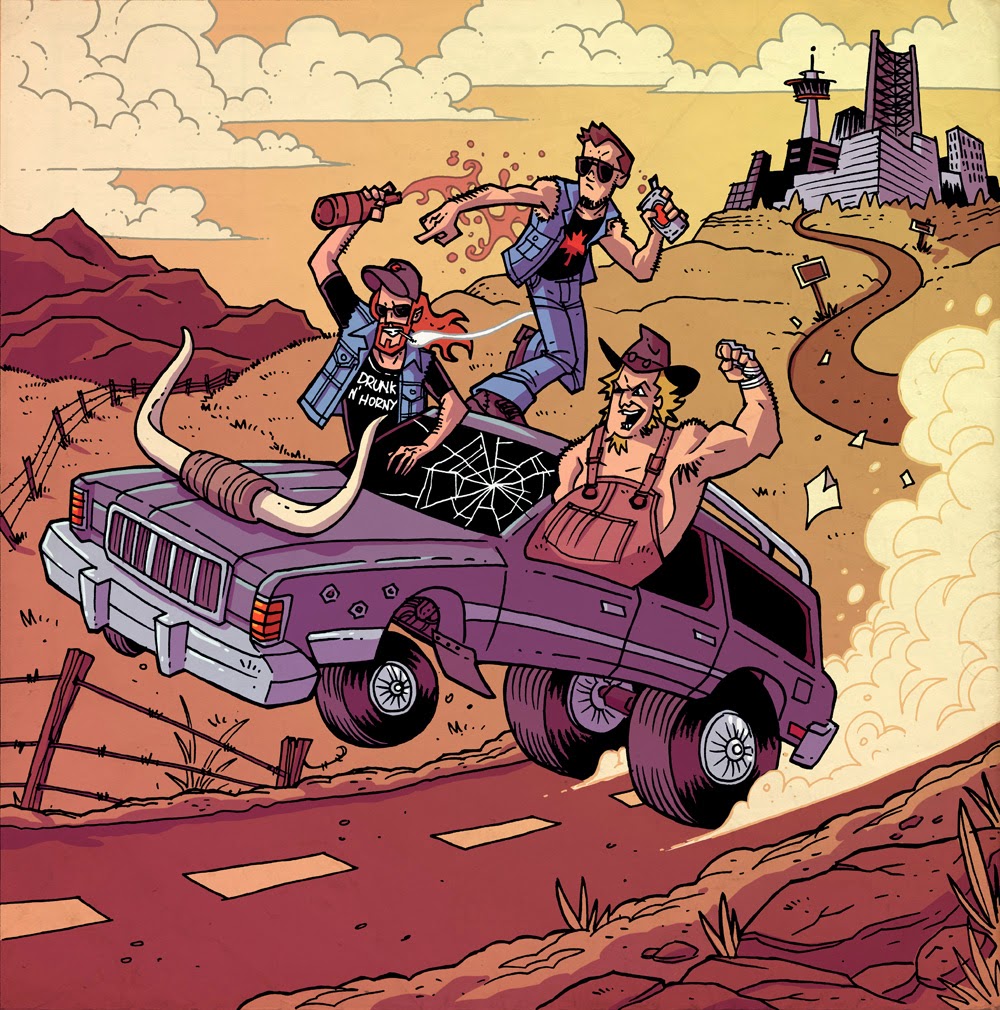 Had a few days to put this album cover together for my old pals of Puttin' On the Foil, an Okotoks band that is gaining quite a bit of popularity due to their drunken shenanigans and high energy tunes. I did their initial mascot drawing a few years ago, which you can see on their website.

They're always fun to watch and I really wanted to infuse this piece with the same energy they display on stage. This image is coloured slightly different from the one I passed on to them for the cover but I like it for the hot-hot colours and Mad Max vibe. 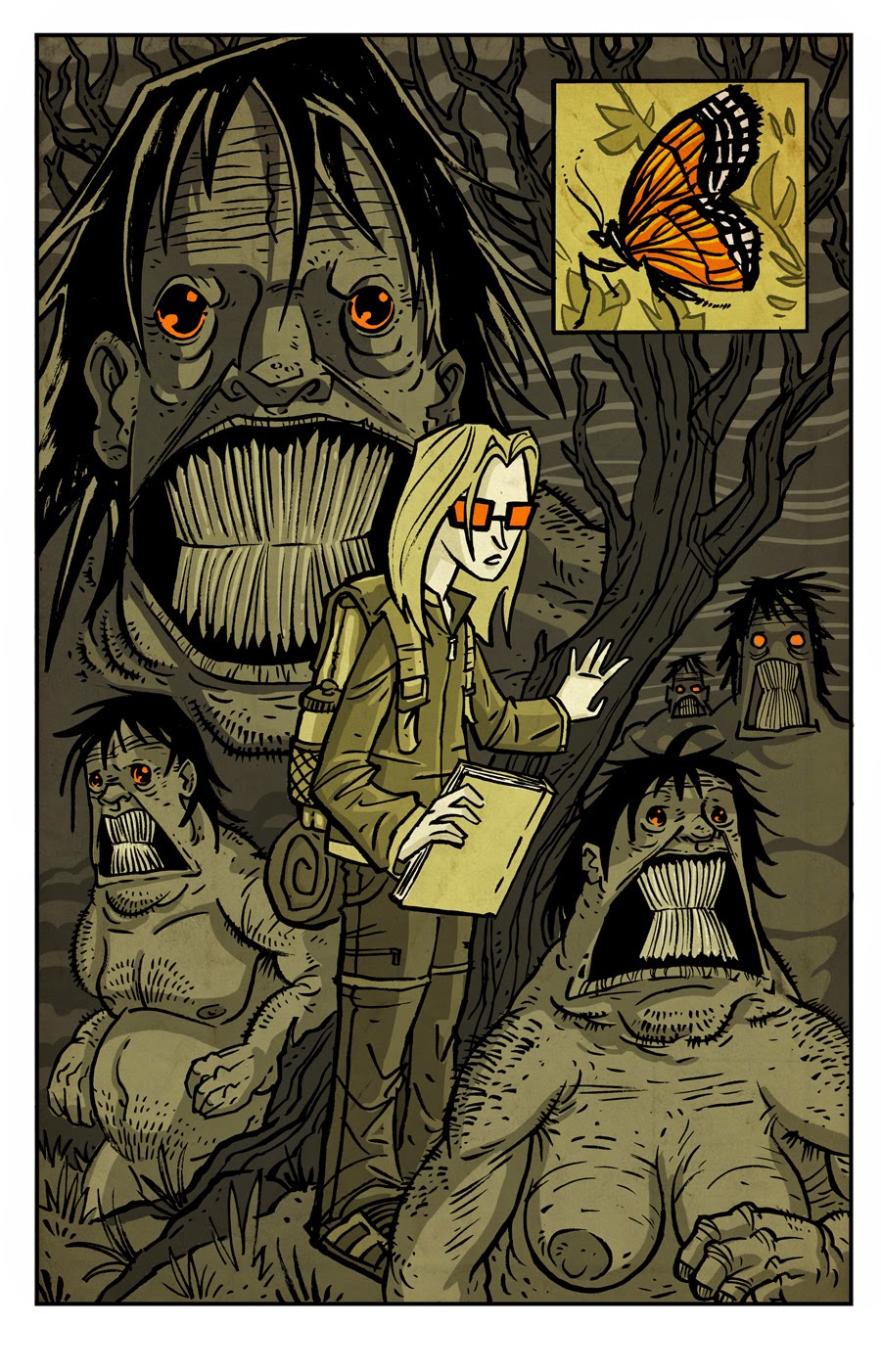 Seeing as how my sketch book is filled with lumbering naked, pudgy old men, doing a pinup for Steven Rosia's Muskoka comic was a no-brainer. He's been kicking all kinds of ass on his Kickstarter and from what I read in the preview, this book has some serious horror legs to stand on. Twas a pleasure to be a part of the campaign. 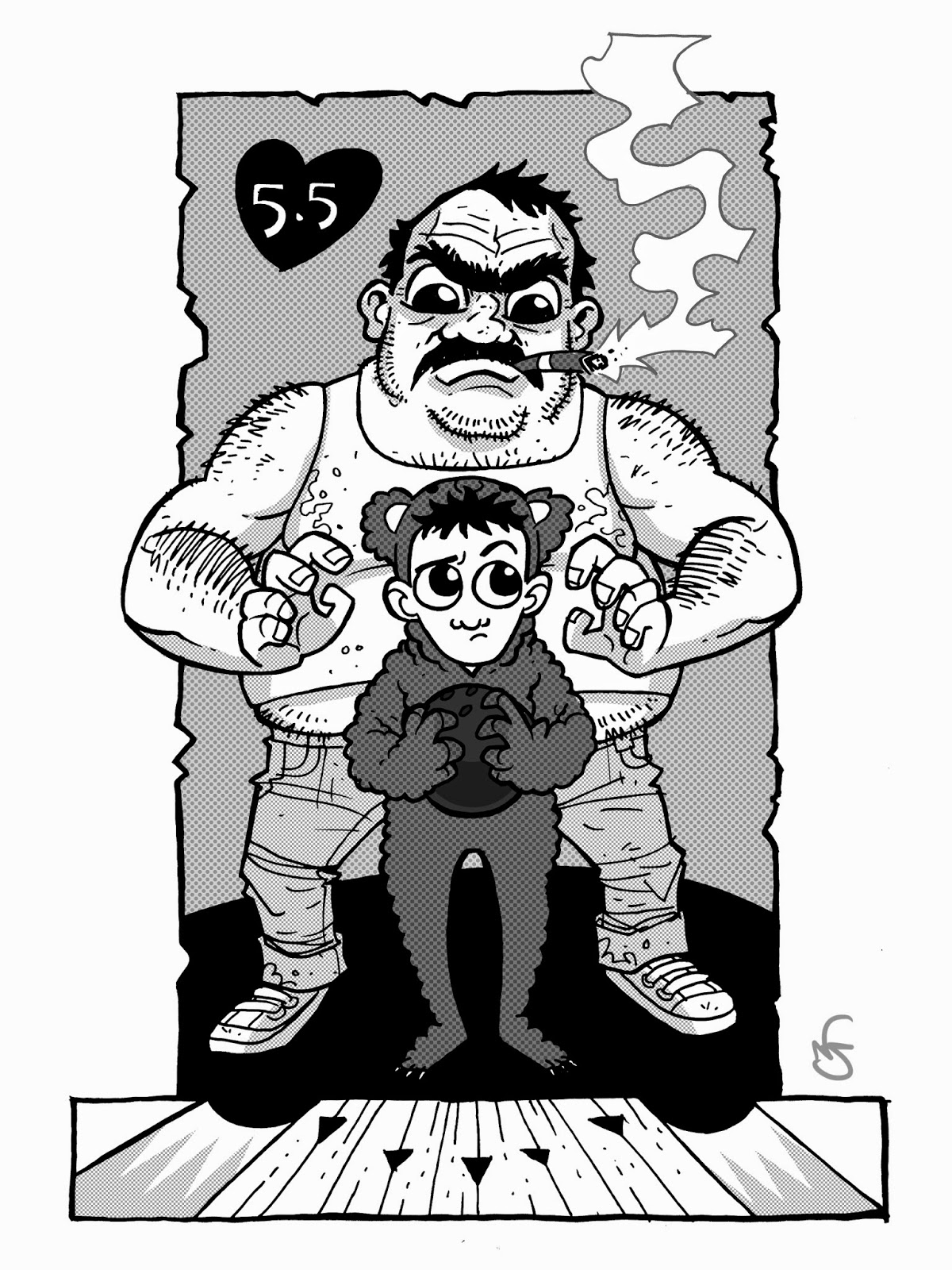 Did someone say "Legend?!?"

Well, let's talk Legends anyway! Damian Wilcox, of Dorkboy fame, has been independently producing comics for 20 years now. He is a staple of the indie comics community in Calgary and was one of the earliest influences on my comic career. Since he is celebrating the anniversary with a collection of his work, I just had to provide a pinup. I nearly didn't make it in time, but I snuck this piece in based on one of the first Dorkboy comics I read, issue 5.5. Still a classic. 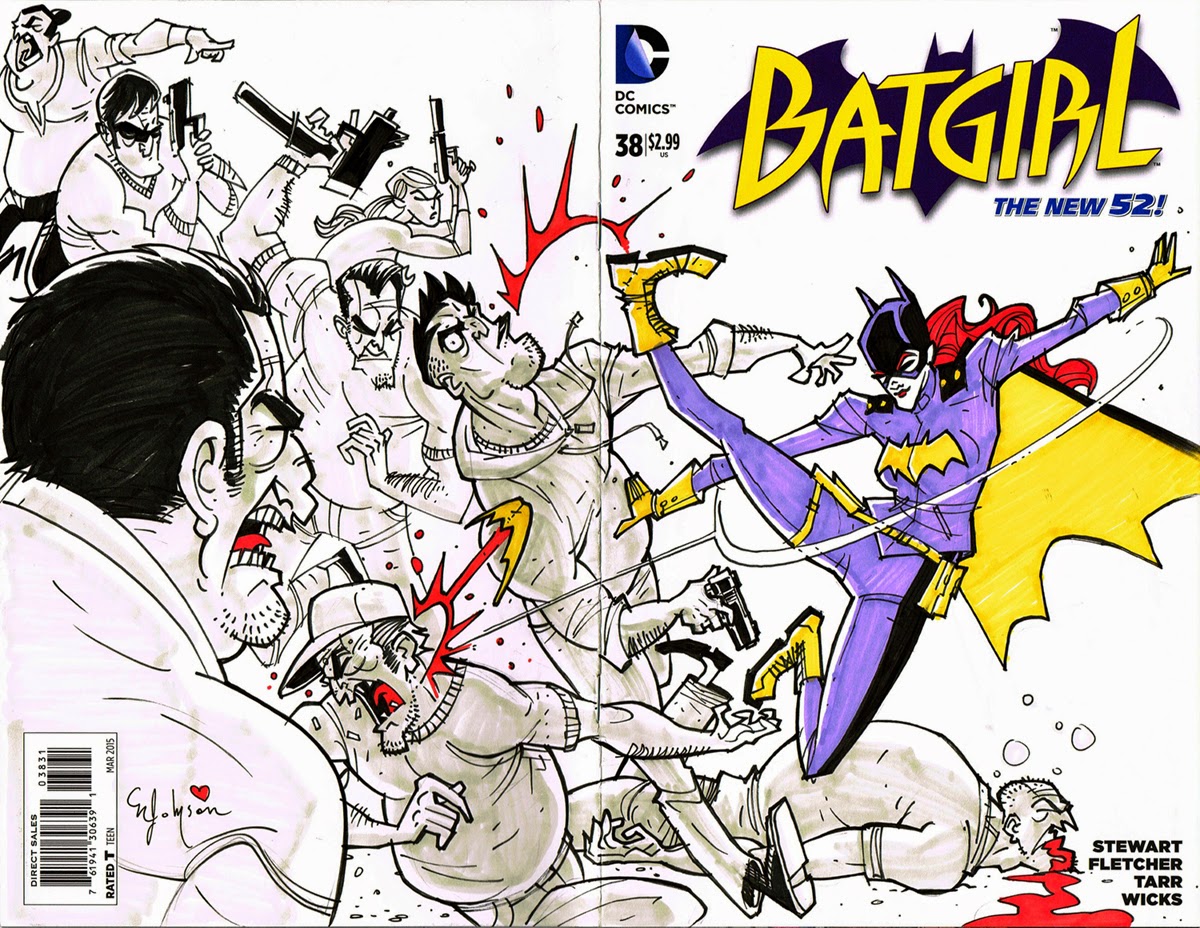 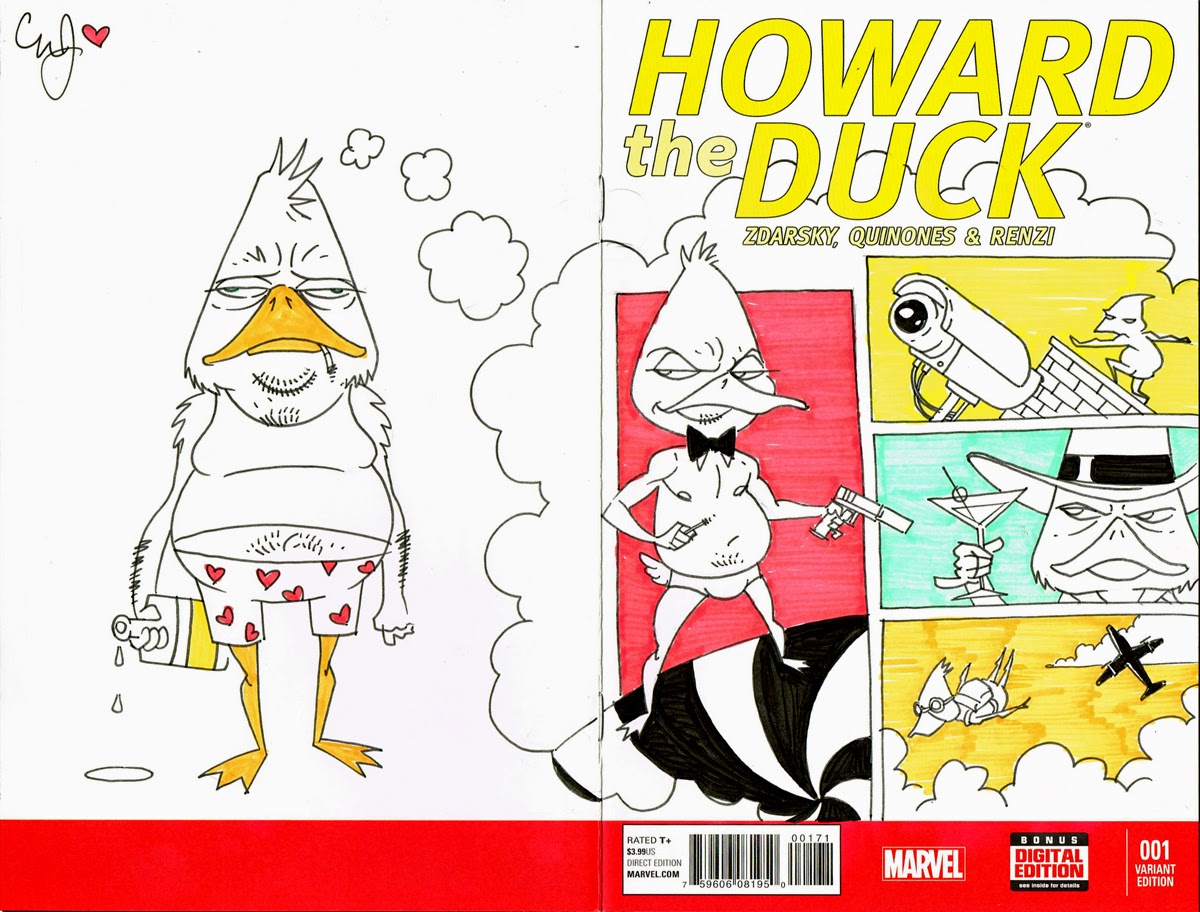 And of course the Alpha Comics Cover Challenge is still going strong. They really build up the artistic community  and its always a pleasure to visit the store, lay down some lines and joke around with everyone. I ended up getting second place for the Batgirl cover, special thanks to Judge Cameron Stewart. The jury (Chip Zdarsky) is still out on the Howard the Duck one. 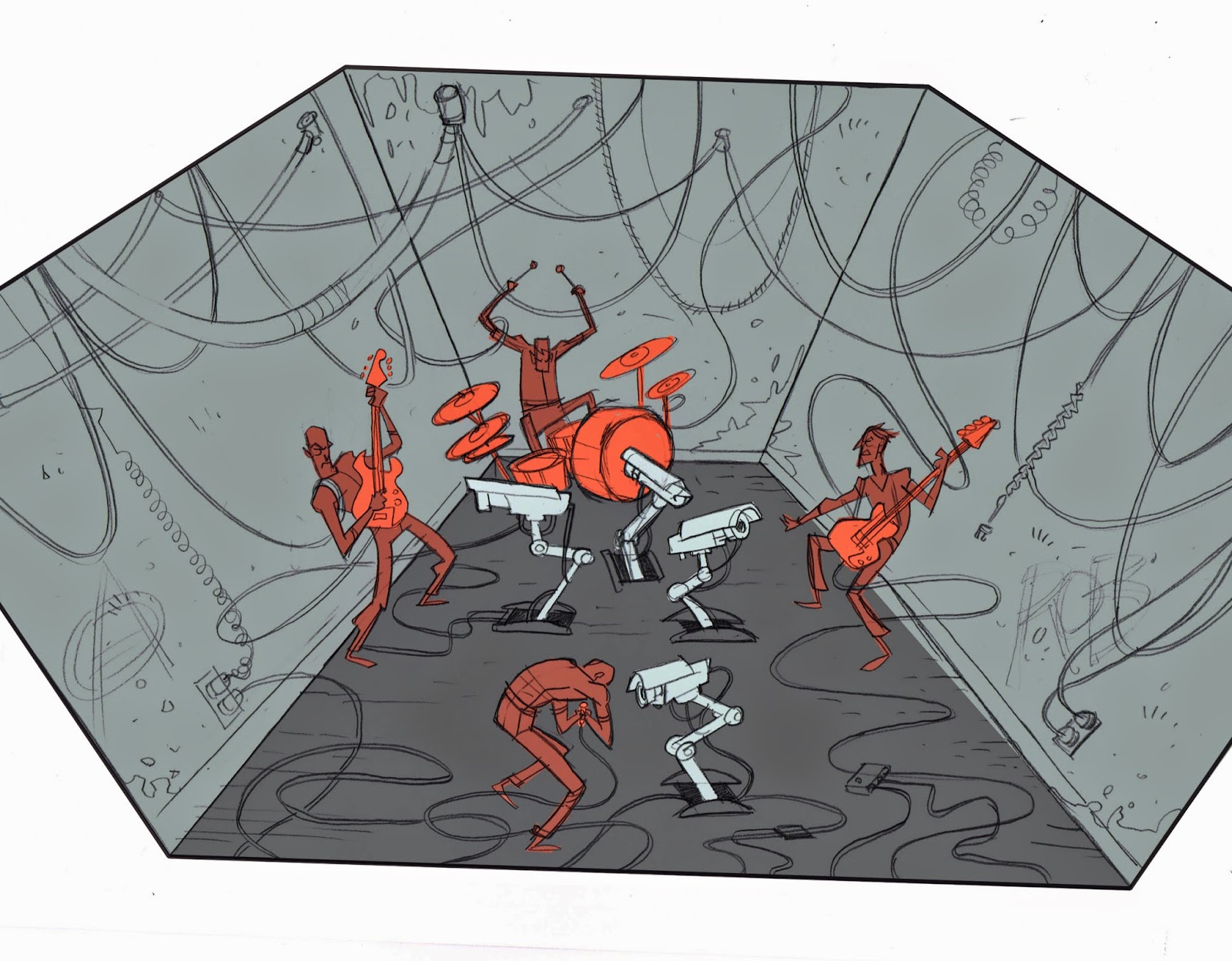 And last but not least, i did some more concept work for music video director Doug Cook. I did a few different pieces but I really like this simple sketch of a band playing it up for/in spite of the prying eyes of Big Brother.

Now I shall get back to inking the remanants of Wolf Hands, as the Expo is ready to rear it's ugly (no, I mean, majestic and awe-inspiring) head, and there is much work left to be done.

Once more into the breach, my friends.