An update was long overdue and while I am creating a lot of work right now, mostly for school, it usually requires some tweaking before I can confidently post it for the collective eyeballs of the world-at-large.

But that's enough lollygagging... let's get right to the arts! 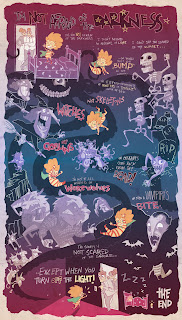 This piece was for Children's Illustration, based on a poem by poet Kenn Nesbitt. It was another chance for me to combine my love of horror and cutesy but for a younger demographic. It was just supposed to be a single spread but I got a little big for my britches, as usual, and things got bizzay. Definitely could have streamlined it a bit in the composition phase. 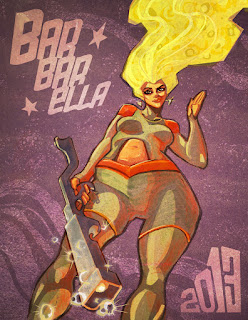 I really do love Barbarella, so for my Illustration class I decided to do a poster for a potential remake of the film (I believe it's been in talks for years but who knows when it will be produced.) Not content to simply draw a hot young space lady, I dove into research of second and third wave feminism, examining modern day female role models from singers and actresses to performance artists like Marina Abramovic. I also picked my girlfriend's brains about the subject, exhaustively so.

I wanted to create a modern day model for young ladies. Things got heavy and confusing and in the end I ran out of time to do a cool costume redesign, so the final version is rather simple. I learned a hell of a lot about how to get in over my head quick but that research helped out with a comic I drew later in the semester (still to be tweaked and posted.) 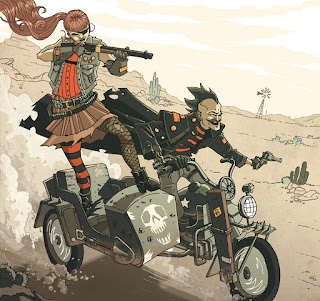 This is for an idea that me and my pal Drew had been working on years ago. It's a good concept and remains safely tucked away in my brainpan, waiting for the timing to be right... This was my proudest piece of the first semester, just a straight up fun piece where I really focused on my colour palette, showing a lot of restraint,  and I think it paid off. 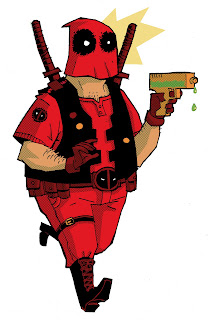 And this is Deadpool! Well, not exactly. It is for ACAD's character guide book for the 2013 Calgary Expo. Basically, it is what a bad Deadpool cosplay may look like. Well, not bad, just not good.

And in epic, history making news, my first published comic credit happened this month!!! thanks to support from local superstar, Riley Rossmo. 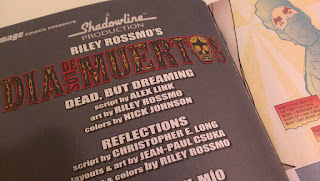 It was for Image Comics' DIA de los MUERTOS #1. I coloured the first story by Riley and one of ACAD's most excellent English teacher's Alex Link.

And my first pencilled story will be debuting next month in the second issue! with inks by Riley and colours by recent ACAD grad, the uber-talented JP Csuka.

That's all for now. Should have more to show in a couple weeks.