A few people have asked me why I decided to start branding myself and my work under the Nick Soup banner, and my basic idea was that a delicious and satisfying soup is made out of many different ingredients just as my practice spans many different fields, from art to music, writing and acting (at varying degrees of failure and success.) I wanted an identity that would encapsulate more than my drawing output. Sometimes an idea can't be limited to one medium and sometimes I like to ham it up like nobody's business! Whenever an interesting opportunity comes along, I just tend to say yes. "Hell yes," actually.

Here is a perfect example: 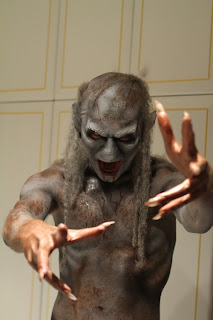 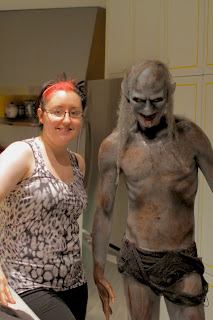 And yes, I have entered ACAD Year 3, which I have dubbed The Awakening, as we are focusing more on creating a unique creative voice compared to the last two years which have been very focused on rendering and reality. So the posts won't be as regular as they were in summertime (beautiful, wonderful, fleeting summertime...) but I'm already balls deep in some amazing projects and I'll be posting those as they finish. For now, here is a sneak peek at some landscapes from my Environments class, a class that exploits my debilitating weakness of rendering landscapes and painting, well, anything. It's super difficult to wrap my brain around but I know it will pay off big time. Be gentle: 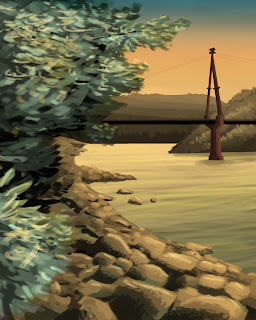 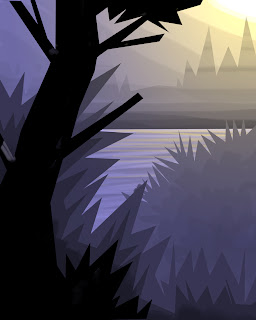 And finally, here is my submission for the Calgary Expo art book that I was supposed to keep secret until the day of release in June and then forgot about completely till now. I like that lady figure but goddam do I ever hate those giant, purple heads. 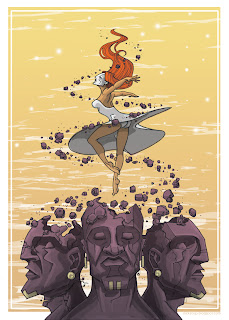 Chin up, my friend. Chin up.

Oh, and check out Ryan Gosling in DRIVE. That movie kicked my ass last weekend!
Posted by MR. NICK at 12:04 PM

Holy crap - yeah, that make-up is amazing. You look just like a woman wearing a tank top and black pants - but I recognized you under there, you can't fool me.
(hee hee chortle snicker guffaw)


Random question: How did you select your colours in that first environment? Were you pulling from a palette, or a photo, or from your head? Because yeah...the colours are really clicking with me in that one. It reminds me of the colours you see right before a sunset, when the sun hits everything at just the right angle and everything gets lit up gold for a few minutes.

You are one funny feller, Cogs (snicker snack!)

The colors were plucked from my pulpy brain pan, basically because I was walking home a few nights prior, noticed a beautiful sunset and made a mental note of the exact colors I saw. I've been geeking out about light lately. It's weird.

Chit chatting with Cogs on the opposite side of the country: time well wasted.