I figured it's been way too long since the last post and I should start the year out right by showing off some new art. First is a Wolverine pic that I did up for a friend's nephew's birthday. It's Wolvie's new costume from Whedon's Astonishing X Men run, which I think was one of the best comics I read last year. Absolutely brilliant and highly recommended! 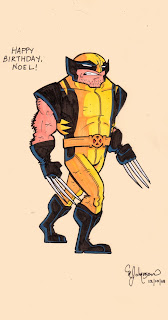 I completely forgot to let anyone know that I had another pic appear in Swerve magazine. Twas an advertisement for a Christmas play called Christmas HAMlet. Sweetest deal? I got paid again:) 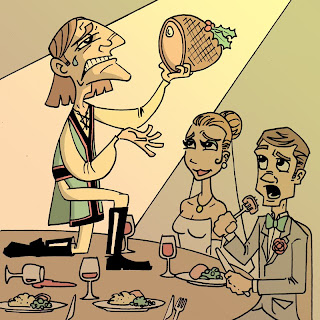 And finally, drum roll, please...ladies and gentlemen, believe it or not, the flighty Mr. Nick Johnson has finally penciled the first page of The Holiday Men, Episode 2!!! There's a different style at work here, a little more detailed, more spotted blacks, and I think it'll seem like a pretty big jump when put next to the first issue. But here's hoping it's not too jarring. Here's a peek at a panel:

And finally, with the start of a New Year, I have committed to writing REACTIONARY, a story that has been percolating in my brain pan for about 6 years. It's pretty close to me as it is a story that brings up a lot for discussion and it isn't actually a comedy, like most of my stuff. It's really my first attempt at a serious work. I'm excited and a little anxious. But enough talk. I'll show you stuff as it appears.

Happy New Year. I dig the wolverine, and that comic panel looks good. Looking forward to seeing some of this Reactionary stuff.

That Wolverine rocks, and I don't even like Wolverine. Glad to hear that the Holiday Men is going to continue. The panel has a Mignola feel to it, very cool.

Is Reactionary about 18th century nobility trying to quell the French Revolution? Because I'm a big enough nerd that that's the first thing I think of when I hear "reactionary".

Jeff: Reactionary does involve a ruling power trying to quell a revolution, though not in that particular setting.

Sorry to get your nerd juices flowing:)