The second semester of the Masters in Comics and Graphic Novels program at the University of Dundee has been going great. I've received dozens of new influences and sources, inspiration from my fellow students and I've been doing interesting projects that challenge and excite me. In the midst of a worldwide pandemic, the continuation of my final projects is giving me the goals and structure I need to maintain my sanity.

For the second semester Comics Production class, our main project was another assignment from the editors at D.C. Thomson's infamous Beano Magazine.

Last semester we were challenged to write and draw a single strip featuring a character from the magazine. The above comic was my submission, featuring Chewie Suarez. This semester, we were supplied with three finished scripts for a 2-page comic and we were able to choose which one we wanted to draw. After pouring over several issues of the Beano, the demented little weirdos known as the Bash Street Kids quickly became my favourite characters so I leapt at the chance to put my stamp on them. I was excited at the idea of doing a condensed story, chock-full of characters, pushing the weirdness and the gestures and the colours as far as I could.

The main piece of feedback I received from the awesome staff at D.C. Thomson was regarding the lettering. I crammed that centre panel of the coach with too much text, obscuring the coach's face; a big no-no, rookie mistake, argh! I went for the extreme close-up instead of leaving room for the bubble and I paid the dire price: a lifetime of shame and regret. Haha, no, no, I'm seriously fine, but I resolved to do a better job on my lettering this time around. So as I leapt forth into the void that was to become this second project, what do you expect was the first thing I did? 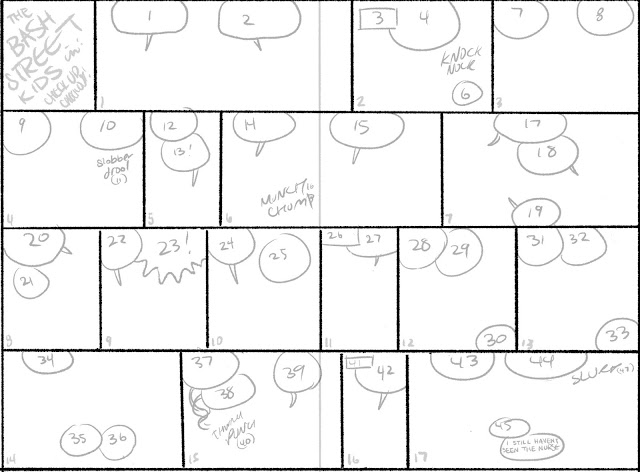 I laid out the letters of course! I had to make sure I left adequate space for the large/copious amount of balloons here so I blocked them all in first, giving me a good idea of how much room was left to squeeze in the characters.

With the amount of characters and text in this comic, I prioritized clarity and performance over experimental layout and wacky panels. I did however decide to compose the story as a double-page spread, going horizontally across the page. I figured this would be a fun way to give it a unique look while keeping the panels themselves rather conservative. It would give a sense of movement and momentum to this action-packed story as well as affording me room to create some nice establishing shots. The caveat to this layout was to be wary of the all-consuming spine/gutter in the centre, which can swallow up important information like a blackhole. All important story and letters must be kept from this area so as not to be obscured by fold or staple. 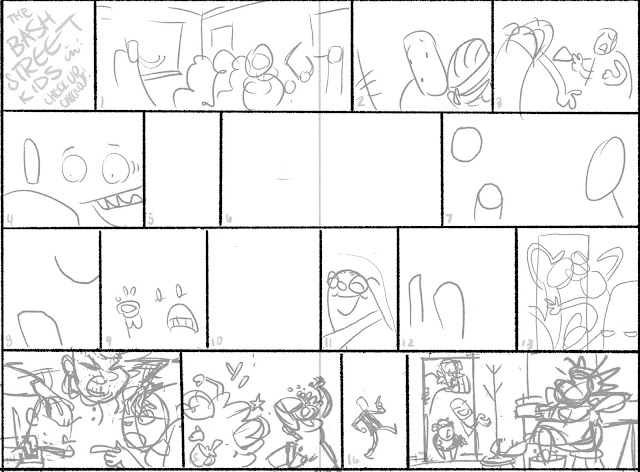 The next step was to lay in the rough (and I mean rough) drawings of the characters. I tend to get sucked into details too damn quick, resulting in a lot of redrawing when I realize that the compositions aren't working. So I constantly forced myself to simplify the thumbnails, focusing on composition and movement over detail and consistency. This was like driving a car with a flat tire, constantly pulling to the left, requiring constant course correction and swearing at myself under my breath.

After the rough thumbs were finished, I knew who was going to be in each panel, where they would be situated and how the story would flow. But I was missing an essential component: character design! 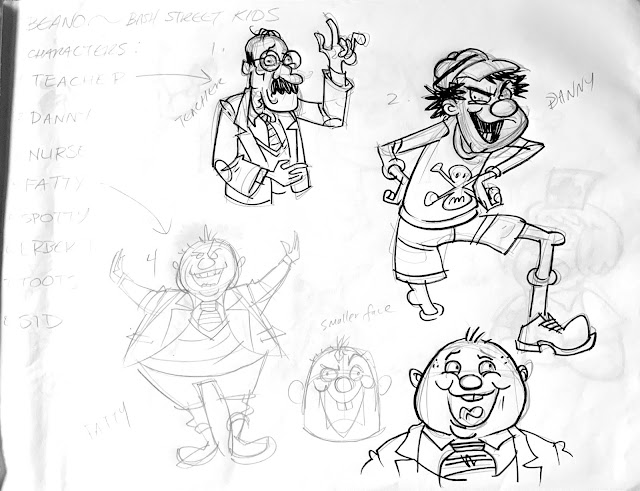 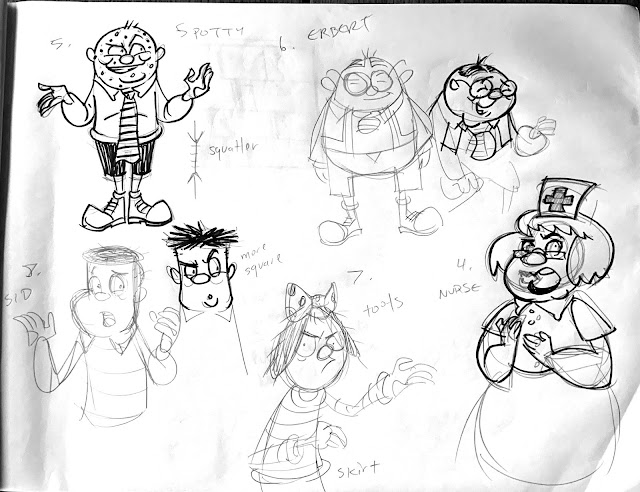 The secret to any good character design is shapes. Keeping things nice and simple here, I was able to get comfortable drawing these characters while putting my own spin on them. I also had to design the Nurse character, who had to feel like she was part of this bonkers Beano world. 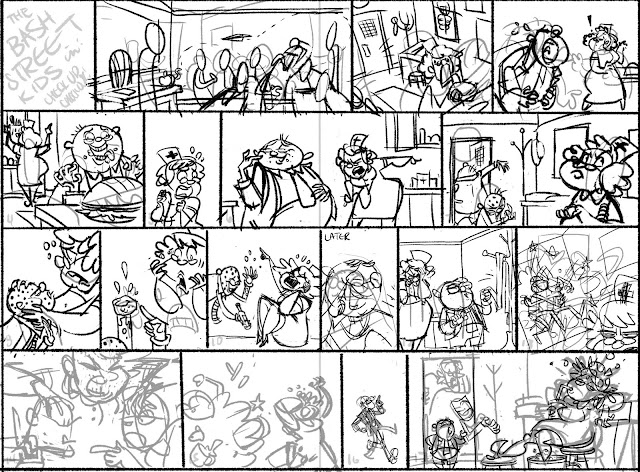 After sketching the characters and getting comfortable with posing them (yep, like a box full of new toys!) I began to play around with the gestures of the characters, really pushing myself to be as expressive as possible. Characters like Spotty and Fatty are just begging for huge, scenery-chewing performances and I had such a blast with this. Confident shapes and exaggerated expressions were my best friend here and I've got a few photo refs on my computer that really helped me to push things. These photos are my secret shame, and not for public viewing. Maybe one day...

The above example shows the school nurse in a couple different poses. I knew that the last pose in the comic had to illicit a laugh based on performance alone, so I spent a lot of time tweaking it. As you can see, that first attempt (or was it seventh?)  accidentally reads a little too...seductive... I might say. While I liked the drawing, I had to give it up because I wasn't exactly going for "nurse as pinup model" here. I was going for laughs! So I kept working... 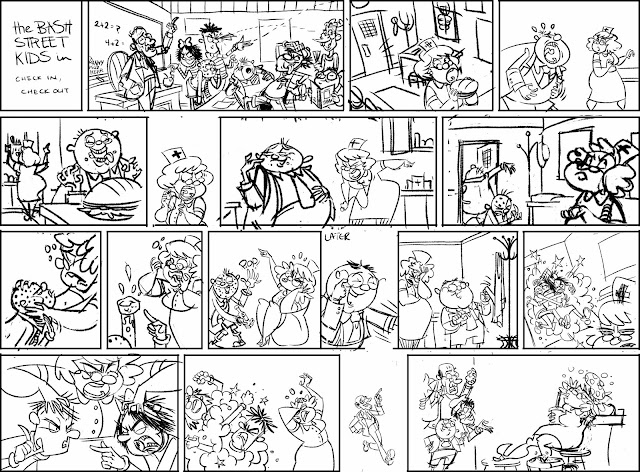 After hours of drawing and redrawing, I finally ended up with some solid (digital) pencils that gave me a good idea of what the final figures would look like and whether or not they sold the story and emotion. Because this was my first go at these characters, I put extra effort to ensuring the designs were consistent, identifiable, yet still featuring my own stylistic flair. One day, when I am a really confident artist, this stage will be done straight to ink. Ah, we can dream... 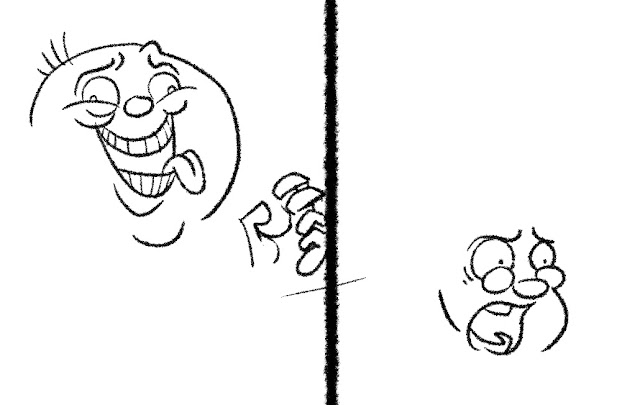 My favourite stage of the process is inking.  Because I am doing this digitally now, I am playing around with various brushes in Procreate that will suit the project and give me the natural, tactile feel of inking that I crave deep in my soul. The above two attempts feature two different brushes. While I enjoy the rougher, sketchier look of the Ink Bleed brush, the Gelsinki (featured on the top) matched the classic, vintage look that I was going for. I researched a lot of Beano comics throughout its long publishing history and was really drawn to the look of the comics from the 50s and 60s. Using them as a guide was helpful to making creative decisions like this. 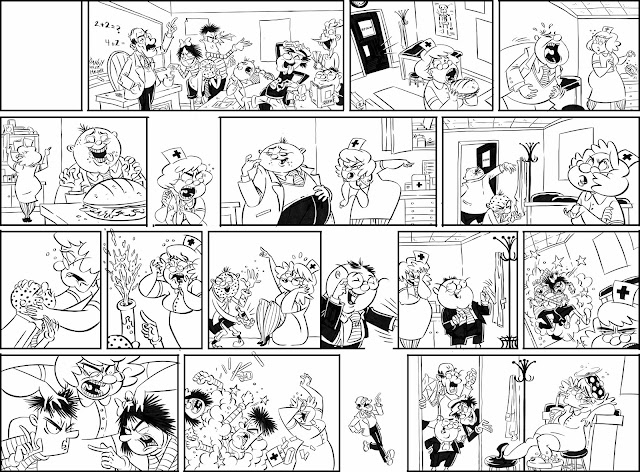 After some trial-and-error, I found I really started to enjoy the brush, and I am quite pleased with the line quality of the finished inks. The key was not to belabour the line, but rather, to keep it quick and spontaneous, while being unafraid to thicken the line to reinforce shape and readability. A delicate dance indeed! 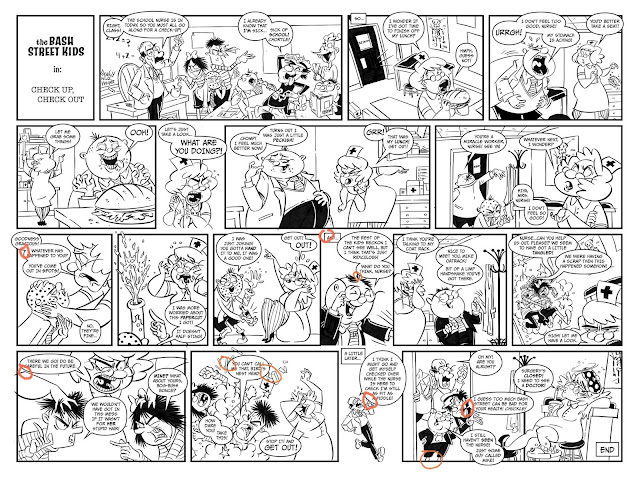 And now, before continuing on to the colouring stage, we jump back to the lettering process for one very important reason: after layouts and pencils and inks....things change! I wanted to be certain that I still had adequate room for the lettering after the script was typed out and the balloons were placed and thank goodness for that. In spite of the fact that I had laid in rough balloons at the start, I still had several areas that ended up being too cramped and confusing. Fortunately, after dropping in the balloons and text, I could see what needed to be tweaked and I made the necessary adjustments. There honestly weren't a lot of issues, but it's those little mistakes that can rip your reader right out of the story. 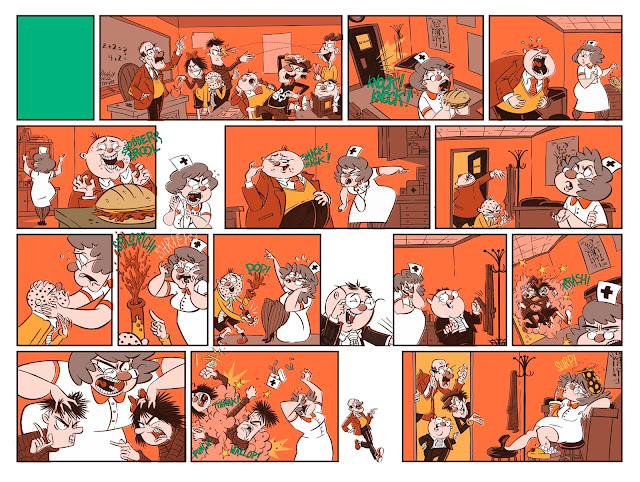 At long last, we have reached the colouring stage! Above are the flats that I placed in and you can already see that I have decided on a fairly restrained palette, focusing on warm colours. Once again, this choice was informed by my love of the classic strip and I really wanted to lean into the idea that this was a vintage comic, ripped out of an old magazine, yet somehow sporting a more contemporary style, as if I had time-travelled to 1950 to publish the comic in an old-school off-press publication (cuz what else are you going to do with your time machine?!)

By keeping all of the colours analogous and allowing the sound effects to be a complimentary pop of green, a nice vibration and energy is imbued into the pages. These sfx were also drawn by hand in an attempt to give them some life and allow them to match the style of the art itself. 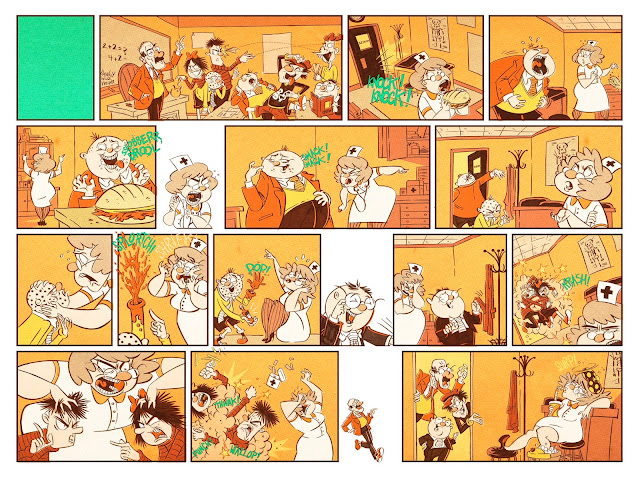 And now here is where the magic happens. Texture has become my secret weapon in colouring. I have never been a fan of slick digital colours, because, to me, they remove the warmth and texture of the comic reading experience.

In addition to the subtle texture of old paper, I play around with the half-tone features in Photoshop which harken back to old printing methods while building layers of depth and texture as well. This makes a clear connection to those classic comics, which is further reinforced by nudging the colours ever so slightly off-register, as printers have a tendency to do. 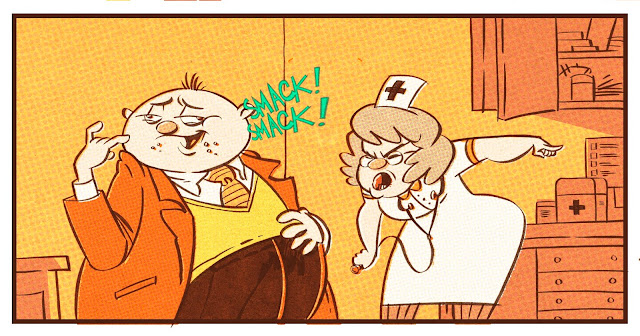 A lot of effort here goes into making digital look analog. So worth it! 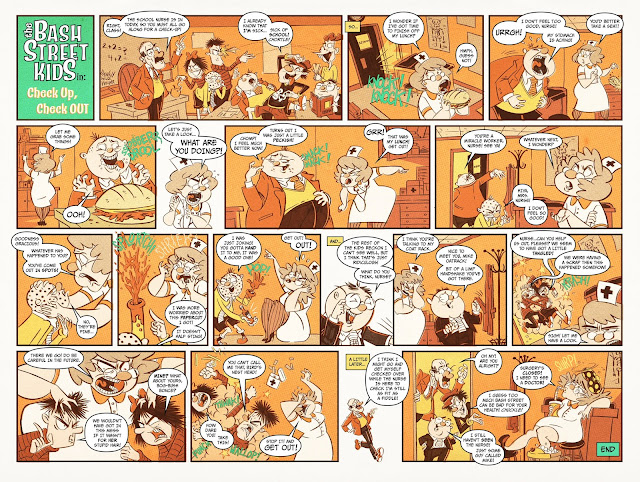 And here we have it folks, the final page! The letters have been tweaked, colour and texture finalized, and even a fun title card created by playing around with fonts in Illustrator. All and all, I am quite pleased with the final result of the piece (though there are a couple lettering tweaks to be done before final submission). My intention was to create an energetic, slightly demented comic featuring established characters drawn in a contemporary style that harkens back to the look of the classic cartoons. And by gum! I think I've done it! A part of me still wants to do one more pass on the inks to add even more gruesome little details and textures but one must move on to the next project at some time, for fear of being trapped forever on the treadmill of perfection.

Bonus points to those of you who have read through this entire post. I hope you enjoyed the long journey, and I sincerely hope you brought some lembas bread along for sustenance (apologies, I've been catching up on the LOTR films while in quarantine.)