The Evolution of Extinction

I know, I know, with a title like that you're probably thinking:

But I had this idea last year as I contemplated the endless pattern/cycle of violence in which man is embroiled: from the first early man who killed his fellow monkey with a rock, to the Greeks vs Persians, the Crusades, World Wars and finally to the men in suits who fight for control of the big red button. I imagined one Atlas-like fellow doing his best to hold back the barrage from consuming the children of future generations, represented by the hologram of the little girl. Is this an act of futility? Can this tidal wave be halted? Whether this is a an optimistic or despondent piece depends on your personal perception, I suppose. And it just happened to sync up with the final project in Figure Illustration, a procession with at least 8 figures.

Well, I definitely met that mission requirement. Actual size of this piece is 16" x 40" which makes it the largest thing I've ever worked on.

Stuff I like: the costumes, most of the figures are pretty good anatomy-wise, good energy.

Stuff I hate: the composition got away from me. I wish I had kept everyone on the same plane, creating more of a crashing dominoes feel. And this could be way messier, grittier. The colour could use some tweaking, as usual. As could the values.

I broke it up so you could get in close and enjoy the grisly details. 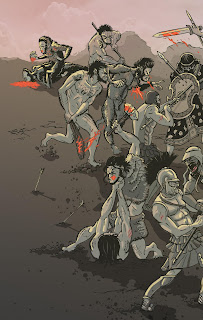 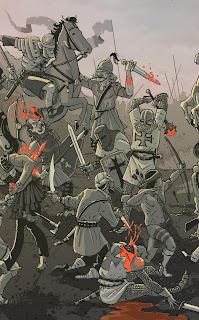 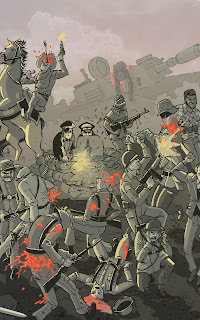 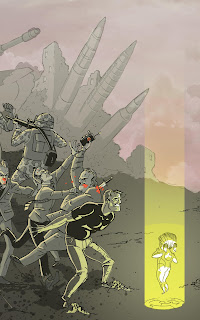 Thanks, Chris. Hoping to see you at a Drink n Draw soon now that school is out and summer is so very in.

You rock my world. Incredible. I think the domino thing, while perhaps being a bit more illustrative of your concept might have ended up looking a little more static and boring than this mad battle you have going on. An unsolicited opinion.

This is award wining shit right here. I love all the brutal fighting and by the time we get to the far right its just a man in a damn suit, stabbed in the back ready to press a button.
Sad, about how much more damage that button would cause compared to every weapon thats on the page combined.
Combat for Pussies

Thanks, Ben and Dan!

I bought this at elevenelevenboutique.com a couple of weeks ago. I dig it! Thanks for making such sweet art, Nick.

You're very welcome! And thanks for supporting local art, John! Glad you enjoyed it, that whole Low Brow show looked pretty damn good this year. Thanks again!