Angels, Thieves and the Power of the Cosmos

Reading Week is here! Unfortunately, there's a To Do list as long as my arm that needs gettin' done and there is rent to pay...

But enough about that boring sheeyit, let's talk illustration! 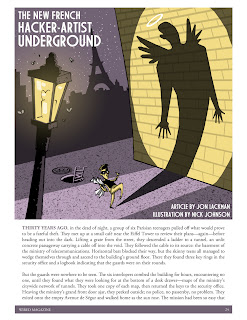 Assignment: For Illustration, choose an article and create a metaphor dealing with opposites that describes it. (Clear as mud, right?)

Concept: The underground French artists known as UX (article here, very interesting.) They are sneaky infiltrators made out to be outlaws who actually use their powers for good. So I have depicted a burglar type character who is revealed to be a bit of an angel.

What I Like: colours, character design, tiptoeing burglar pose.

What I'd Fix: increase randomness of moth displacement, make angel less blocky and add more movement and personality to his pose. 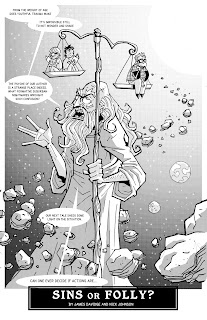 Assignment: This is a new intro page for James' upcoming collection My Modern Panic, for which I created the cover last year. It was great to be able to add a little extra to an old story (I re-lettered it and added some values) and it felt great to add some new art to compliment the story.

Concept: James wrote a sweet little poem as read by the Crypt Keeper-ish host Hermes. The characters from the upcoming story are balanced on the Scales of the Cosmos!.... or something.

What I'd Fix: The composition was close to good, then I screwed up and placed it dead centre. Wiht the text all on the left, things are a little left-side-heavy. And the title itself is boring and lame. But I have time to improve it so that's what I'm gonna do!

Look for My Modern Panic at the Calgary Expo this year!