To Hell With Conventions!

Hey, it's my birthday, but I have a gift for you!

Because I'm a rule breaker,
foundation shaker,
a loose cannon who gets results,
with or without his badge and his gun. This is the main character for the graphic novel project we're currently working on in Figure Illustration. Her name is Madam Bauhaus and she is inspired by a photo I found of a Bauhaus actress in costume. 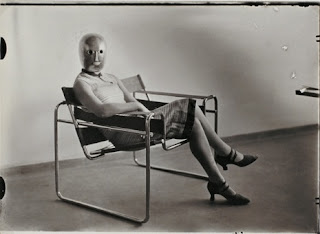 It struck me as very bizarre and weird and super inspiring and I knew that I would have to use her as a character one day. She is basically the personification of the utopian ideals of the Bauhaus school. She runs around with a hammer and a bag of brass tacks, kicking ass in the name of progress. She is alluring and off-putting, like the dream of Utopia itself. Which has recently become the running theme of my work thus far.

I got really carried away with texture, experimenting a lot with collaging real materials and scanning them, as well as adding half-tones and such. I want to far and didn't pull it back enough so the images are a bit too much. But it was very fun to mess around. I'll be doing more collage for sure. Lesson learned. Moving on.
Posted by MR. NICK at 9:53 AM