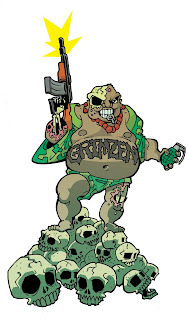 ME THREE has played with these guys three times now and they are lots of fun and they sound better every time I hear them. I had fun redesigning the logo for them and this is now online via their MySpace and I believe they intend to make it part of their next T-shirt line. Which is awesome! Am I worried about this controversial depiction of chubby Buddha? Slightly. But it was the band's idea, I'm just the guy that drew it :)

I should say, this is the slightly different version from Grimzen's, as Chris Peterson helped me adjust some of the colors in post for more impact. Pretty sweet.

In other news, HARRY GOES FISHING has been printed and is ready to be sold and distributed. 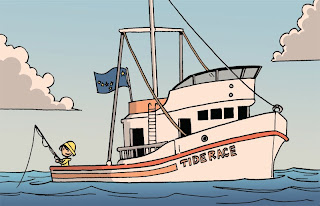 The release is fairly limited, as it is independent, but if you'd like a copy, feel free to get in touch with me. They're going for $10 a pop.

I read some great books recently:

Naked Lunch
Lord of the Flies
A Clockwork Orange

I'm working on Catch-22 right now and it's hilarious. Really good so far!

Well, must go now. Lots to do, as with any Monday. In fact, with each Monday that rolls around, I kind of wonder if I'm going to be able to pull it all off...