"We Will Not Join Your Ballet."

Yes, so my blog has been rather truant, of late, so here we go. Update, ho!

After this evening, I'll be over halfway through my Manga project! Yes! And I double checked with my editor and he said I could post a small preview of my stuff. Double yes! 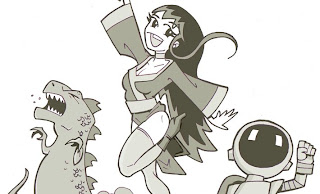 It's a cute little story, full of cute, adorable things. It's quite sweet and pretty fun to draw. But I'd be lying if I said I didn't have the urge to depict some horrific violence to compensate. So on that note: 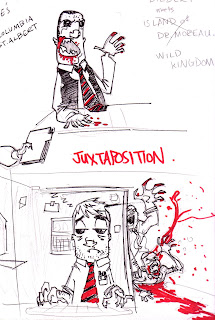 This is a fresh idea I loved two weeks ago that I only sort of like today. Basically, if humanity took a different evolutionary turn and ended up a bit more predatory, what would office life be like? Life or death, baby. You could get eaten by the boss for fucking up those TPS reports. Or maybe just because he's hungry! . . . I'll work on it.

Free Comic Book Day was last weekend. I went to Edmonton with a coupla the VA guys and Fiona as well. And it was freakin' AWESOME! Thanks to Happy Harbor for throwing the legendary bash! You can get a taste of the wickedness by reading Stephanie Chan's report here. Sketching all day with Steve G., Chris, Fiona and Steve R. was so much fun and the party at HH v1 that night was outta control! And then I lost a buncha laundry money to Steve R.'s horse race game. Take my advice, kids: Quit while your ahead! :) Here are a few more pics of the madness: 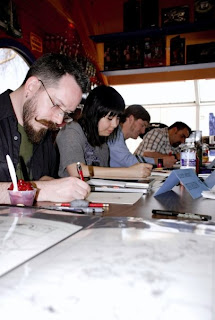 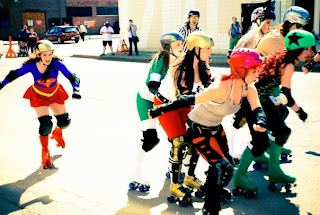 Oh and the week before was the Expo! Rocket Juice debuted to a smashing success! We're nearly out of our first print run already! And the VA Dance Party was also tons o' fun. You can actually see a clip that was posted by a dancing fan on the YouTubes. Damn ghetto blaster was malfunctioning but fun was still had.

Well, it's been crazy busy this Spring, but most of the madness is through. I do have an awesome project in store for this July but I'll have to hold on to that mystery nugget of wonder for another month or so. But rest assured, Comic World is coming.

Here are some unfinished pics from yesterday's Drink n Draw: 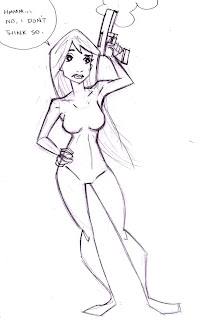 Thanks for stopping in.

PS Hey, Fiona. I won the blog-update-race that you didn't know we were playing.
Posted by MR. NICK at 6:27 PM

That Office Eaters concept is pretty cool too. Made me think of the old Dinosaurs show.

Thanks, Caleb. Yeah, Drew said the same thing about Dinosaurs:)

I'm pumped to see your Manga book Nick. Keep up the great work!