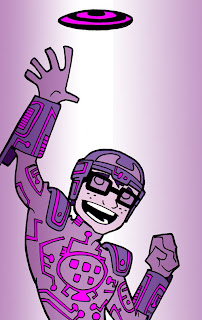 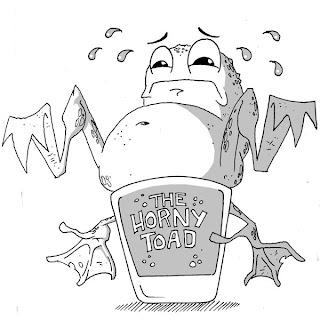 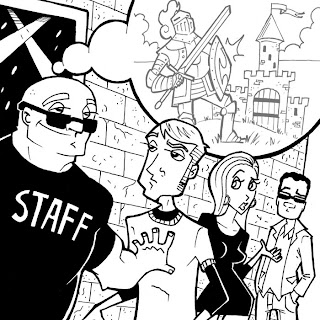 An update at long last. I've been busy working on a few projects lately, though I'm not able to show all of it at the moment. But here's a glimpse of what I've been up to.

There weren't a lot of people there sadly, but there was jokes, chocolate cake, videos and it's not everyday I get to wear red booty shorts while shaking my goodies to Eye of the Tiger. Anyways, this TronNick pic was for the free poster giveaway at the event. We still have a bunch left so we'll probably be giving them away at the next con in October.

In other news, I'm working on pages of my Rocket Juice story and will scan them very soon to give you a peek at the pencils before Ink Wizard CogNoman works them over. I was trying to do this comic very quick and simple, but the first page already has more background's than ever. I'm very excited to show it off, and will post some pages soon.

This morning, I also finished the first script for a secret project I'm working on which will see the light of day sometime in the winter, I'm hoping. It's going to be tons of fun and I'll keep updating as work progresses. It's not a comic, but it is about comics.

And I think that's it for now. I'm going to finish the layouts for Holiday Men very soon and am eager to start drawing in September. Realistically, I think we'll start up again in October.

Oh, you should check out Tropical Thunder too. It's hilarious! Oh, and read some books by Stephen King's boy, Joe Hill. Heart Shaped Box was freaking great! And his short stories are wonderful.
Posted by MR. NICK at 3:17 PM

That Bouncer reminds me of my buddy Ed. He was also my boss when I bounced at some clubs in Winnipeg. He was a Tank. Only 5'7, but I thnk we was 4 feet wide :D
Chicks are coming along great as well.

I was kinda worried my take on the bouncer was too stereotypical, but then I guess that stereotype exists for a reason:)